Looking at the Longlist: Writing as a ‘Scandalous and Outrageous Act’

Lebanese novelist Jana El Hassan (@Janaelhassan) was longlisted for the 2013 International Prize for Arabic Fiction (IPAF) for her second novel, I, She, and Other Women. El Hassan, who has worked for several Arab newspapers, and currently writes for The Daily Star, studied English literature, graduated in 2006 and is currently am pursuing a master’s degree. She answered a few questions about the IPAF-longlisted novel, and why she writes:

ArabLit: Can you talk about the shift between your first novel and your second? What were you trying to grasp with your second novel that you didn’t feel you had gotten with the first? What did you learn while writing the first that you brought to the second?

Jana El Hassan: When I wrote my first novel, I was stuck in a small social circle that deemed writing a scandalous and outrageous act. I used to sneak into my room, whenever I had the chance to, in order to write. Writing back then was for the sake of defending my right to write, thus I wasn’t fully focused on the book or the story. The challenge was to keep on writing.… I was angry and bitter and I think I transmitted that to my first book. That’s why I always say my first novel was an attempt to write, just like setting ground or warming up for the big thing. The first experience was, nevertheless, very useful because it taught me to separate myself from the story I am dealing with and learn to see it from perspectives that go beyond my feelings or moods.

AL: When did you begin writing أنا٬ هي والأخريات? Did it follow straight after the first? Where were you? What was the spark for it? 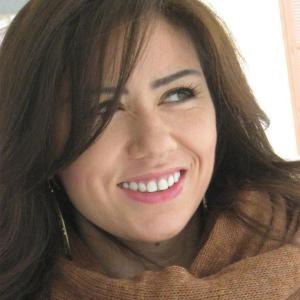 JEH: The second novel didn’t follow straight after the first one, it came almost four years later. I was always writing anyway, even if personal notes, and I had actually started writing a completely different story when all of the sudden, I decided to quit and write what eventually came out as Ana, Hiya, Wal Oukhrayat. I was at work and the idea popped into my mind. I wanted to write about women who betray their men and go a bit further than betrayal itself to see what is beyond it. I think I ended up writing about human beings, both men and women, betraying their inner selves. I was questioning both genders’ right to individuality and ended up writing about all of us and the gap between the real “us” and the image we build of ourselves, and ultimately how such cracks manifest themselves in our lives.

AL: What did you really enjoy about writing أنا٬ هي والأخريات? And, on the other side, what gave you the greatest difficulty?

JEH: I definitely enjoyed both senses of creation and discovery writing provides you with. It’s like building up another world, one brick after the other, and roaming into the alleys of this virtual sphere discovering what you thought you would never have answers to. The challenge, on the other hand, was how far you can really let your mind and heart go uncensored for them to be the guide in such exquisite journey. Another difficulty is the constant worries writing can get you plunged into. Sometimes you worry you are not writing enough, others that you are not giving it what it needs. Writing my second novel kept me agitated for quite a while. It was like carrying a baby in my womb. They day I finished Ana, Hiya, Wal Oukhrayat, I seriously felt real pain in my stomach, exactly like I have just gotten through a hard labor and given birth.

AL: Why write fiction (and not just journalism, or memoir/autobiography, or poetry)? What are you trying to do with your fiction?

JEH: I write journalism and some poetry, but I never wanted to become a poet or simply a journalist. My dream was and still is to become a novelist. I believe stories can change our lives and some novels actually did that to me. When you are writing fiction, you are entitled to be a poet, a journalist, a dancer, an evil man, a saint, a photographer, an Islamist fighter, a president, a carpenter, a house worker or even a vagabond. You are granted full access to imagine the lives of all these people, to feel them and portray them. What other riches can one wish for?

AL: Some women writers avoid the intersection of life and fiction, as (some) men writers say that women only write about their lives. You’re not afraid of that?

JEH: I’ve learned to be loyal to my words as to embrace them once they are written rather than fear them. Fear is definitely a normal feeling but writing is an act of freedom that helps you overcome fear. As for the intersection of life and fiction, I depict it as richness rather than a weak point. You are in the present moment and a witness to everything going on around you, why should you feel afraid to tell about that. I am very much of a self-critic. I can look at myself and say that was wrong, you need to fix that or to work a bit more on this certain point and I do listen when someone is trying to make his/her experience useful to me. As for (some) men or woman who have nothing better than being judgmental about what you do, they surely don’t provoke any fear in me.

AL: As I’m sure you’ve noticed, there are only two women (you and Hoda Barakat) on the “Arabic Booker” longlist. Why do you think that is?

JEH: That is not for me to answer… I don’t know what the submissions were. Basically, I am against sorting books by gender, i.e. written by a man or a woman. It’s either a good book or simply not, it’s not a male or female book, we are not in a shopping center classifying items in such way. Literature is superior to that.

JEH: I actually started thinking about my new novel; I am just waiting to be more ready and to have some more time to start writing. I enjoy reading poetry, classics and of course contemporary novels by both Arab and international authors.

One thought on “Looking at the Longlist: Writing as a ‘Scandalous and Outrageous Act’”