‘For Every Fox, An End’: By Zakariya Tamer

“When I started writing stories, I never tried to imitate or submit to the prevailing styles.” So said Zakariya Tamer a year and a half ago, and the prolific short-story writer continues to post his thoughts and stories on a Facebook page he calls The Spur: 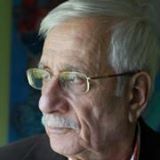 Several stories from The Spur have been translated and published — five appeared on Jadaliyya, trans. Marilyn Hacker — but this story, trans. Robert J. Farley, was published in 1985, a year when presidential elections were held in Syria and there was only one candidate, Hafez al-Assad. He won a reported 100% of the vote.

For Every Fox, an End

The Lion was roused from his slumber by the hooting of his neighbor, the Owl. Vexed, he commanded the Owl, “Enough with this dreadful hooting!”

“I woke you up to warn you that you will die in the coming days because you’ve grown old,” replied the Owl. “You will die and go far away from the forest.”

The Lion contemplated all that was around him: the clear blue sky, the golden sunshine, the green grass and flowers of yellow, red, and white. He then became distressed, and his resentment towards death, the Owl, and aging tormented him. But he forgot his sorrows immediately when he caught a glance of a plump fox, and he readied himself to chase after it.

The Fox became aware of what was threatening him and became terribly frightened. But he didn’t run away. He approached the Lion quickly and said, “You actually believe the oracle.”

Curiosity overcame the Lion. “What are you saying?” he asked the Fox.

“Yesterday, one of the oracles told me that you will die after the passing of one day from my death,” the Fox replied.

The Lion sneered and jeered, “And how do you know that I am the lion of whom the oracle spoke? The forest is filled with lions, and lions—as you know—do not have names.”

“The oracle told me that when I catch sight of the lion who will die after me, I will be able to know what is on his mind. And when I saw you, I knew immediately what you were thinking about.”

“And what was I thinking about?” inquired the perplexed Lion.

“You were thinking that fox meat is delectable; it cures ills and makes you forget your sorrows.”

The Lion was astonished. “As a matter of fact, that is what I was thinking.”

At that moment the Owl hooted. “The wicked Fox tricked the strong Lion.”

“Quiet! This has nothing to do with you,” the Lion snapped at the Owl. He then turned to the Fox and said to him in a tender, entreating tone, “Live with me, and I will provide for you all the meat and grapes you need.”

The Fox was delighted and indicated his agreement with the Lion. Of the formerly unpleasant situation, a love was born which now granted him a happy life, free from peril and pain.

One day, the Lion was famished, and there was nothing in the forest to eat. He lost control of himself, pounced on the Fox and ate him, paying no heed to his cries for help. After he ate his fill, the Lion went to the river, washed his hands, cleaned his teeth, and lay down underneath a tree branch. He closed his eyes and almost succumbed to slumber, but he jumped up in fright when he heard the Owl hooting, “The Lion is going to die! The Lion is going to die!”

The Lion then realized what had happened, and he felt the deepest regret. He was convinced that he would die the next day just as the Fox had said. But he did not die. He continued to live, hunting the foxes and all of the other creatures weaker than him.

Zakariya Tamer was born in 1931 in the Al-Basha district of Damascus. His works have been translated into many languages, including English: Tigers on the Tenth Day (trans. Denys Johnson-Davies) and Breaking Knees (trans. Ibrahim Muhawi).

Robert J. Farley is a doctoral student of comparative literature at UCLA, focusing on Arabic literature and gender studies. He is currently based in Amman, Jordan as a Foreign Language and Area Studies Fellow for the 2013-14 academic year.

One thought on “‘For Every Fox, An End’: By Zakariya Tamer”