In less than a month, the Library of Arabic Literature (LAL) will launch its first four English-only paperback volumes, making these translated works available to a wider patch of the reading public: 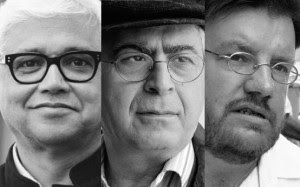 The launch is set for the Center for Fiction on October 8, where LAL General Editor Philip Kennedy and author and professor Dame Marina Warner will moderate a conversation with celebrated novelists Amitav Ghosh, Elias Khoury, and Sinan Antoon about “the richness of the Arabic literary heritage, the thriving contemporary Arabic literary scene, the challenges of translating Arabic literature for contemporary English-language readers,” as well as the contributions of LAL.

The initial list of four English-only paperbacks, which will be available for sale at the event, is: Ahmad Faris al-Shidyaq’s Leg Over Leg: Volumes One and Two and Volumes Three and Four, translated by Humphrey Davies; al-Shafi‘i’s The Epistle on Legal Theory, translated by Joseph E. Lowry; and Ma‘mar ibn Rashid’s The Expeditions: An Early Biography of Muhammad, translated by Sean W. Anthony.

The first volume of Shidyaq’s Leg Over Leg was shortlisted for a Best Translated Book Award, with prize judge M.A. Orthofer calling it “the most important literary publication of a translation into English, in terms of literary history and our understanding of it, in years.” You can also read an excerpt in The White Review.

You can also read an interview with translator-editor Joe Lowry on The Epistle on Legal Theory and one with Sean W. Anthony on The Expeditions.

Those who’re interested in attending should RSVP here. You can also find all the paperback covers, and more details about the launch event, at the LAL website.

Support ArabLit by making a purchase through our RedBubble shop.