10 Authors’ Favorites of 2015: The Year in Arabic Literature and Beyond

Ten acclaimed, popular, and up-and-coming Arab authors give their favorites of 2015:

For me, the best novel published in 2015 is Mohamed Rabie’s Otared. I’m not a fan of political fantasy, but Mohamed Rabie was able here to execute his literary project, which pushes this kind of fantasy to the hellish, nightmarish dystopia with a combination of a great novelist’s questions about the world and human existence and also politics.

The year’s best collection of poems was Eleven Dogs, by the poet Ibrahim Elsayed. It took him about eight years to complete, since he issued his first, and out of it came this amazing picture.

The best translated book is Berlin Childhood by German philosopher and critic Walter Benjamin. It’s been transferred from the German to the Arabic by Egyptian storyteller Ahmed Farouk, who has created a beautiful translation that’s a real addition to Arabic literature.

READ: You can find poems from Eleven Dogs, in translation, on Qisasukhra. You can also read a translated excerpt of Otared on Mada Masr. Both by the excellent Robin Moger.

Hisham Bustani is the author of the University of Arkansas Translation Award-winning The Perception of Meaning.

Since the literary writer should continuously expand their scope of reading and knowledge in order to improve their artistic tools and expand their conception of the world, I have chosen for this year’s list one book of short fiction, one of science, and one of political economy.

In contrast to the disappointing quality that has become rampant in the realm of the novel, the short story has evolved to become the artistic representative of Arabic prose. Boukebba’s Death Shroud joins a list of exceptional works of short fiction whose writers are continuously developing their literary tools and maintaining their conceptual courage in stepping outside the traditional story structure and continue the process of “inventing” its form.

This book is a series of intertwined and interconnected short-shorts that involve an intertwined and interconnected  cast of characters and events that reflect confused times, malformed relationships, tension between the writer and his writing, and, of course, death. For those who want to read this work in translation, Adam Talib has rendered Death Shroud into English. It will appear in the upcoming special issue of Amherst College’s literary review The Common, dedicated to Arabic prose in translation, co-edited by me and Jennifer Acker, to be released April 2016.

I have long been an avid reader of biology, physics, and cosmology; but this book (although much simplified for the common reader) opens yet another perspective on how one perceives life, the planet, and the interaction of its components. Not only do plants have a larger number of senses than most animals (including humans), they are also quite intelligent with effective communication tools; reproductive, symbiotic, and predatory schemes; plus a networked decision-making center. Brilliant Green transforms the way we look at the world of plants, and, as follows, the world.

Why did the Arab Spring fail? Why are Arab post-colonial states a failure? Why do we still have oppressive regimes and continuous wars in the Arab World? This ambitious book sets out to answer these questions by proving that development has been purposely-stopped in the Arab region and replaced by a process of de-development that is profitable for both local regimes and their Western principals. The book also describes how war in this region has become an end in itself rather than a means: through a process of continuous war, global capitalism and its local agents accumulate profit.

Nael Eltoukhy’s most popular novels have been his 2006 (2009) and Women of Karantina (2013). At least one commentator has already foreseen a future Nobel for Eltoukhy, and he was longlisted this year for the first-ever Financial Times ‘Emerging Voices’ Prize, alongside Elias Khoury. His Women of Karantina is available in vivid, fun translation from Robin Moger (2015). 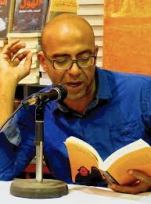 Malim the Greatest (Malim al-Akbar), was a novel by Adel Kamel which published for the first time in the 40s in Egypt and republished now by Dar al-Karma. In this novel, which has a very important theoretical introduction about Arabic literature, Kamel approaches the relationship between intellectuals and ordinary people, especially when they are witty and clever and doesn’t feel a sense of inferiority, and the jealousy intellectuals feel toward these kind of people. It proceeds through a plot about Malim, the witty boy who lives with a group of artists, foreigners, and Egyptians in an old house in ancient cairo. One of the main characters also is the leftist aristocrat young man who identifies himself with Malim and tries to defend him when he is charged by robbery. This character can tell us a lot about political activists in their relationship with the objects of their struggle, which is disappointing sometimes and not always positive. It’s an extremely clever novel and can tell us very easily something very new about our lives in Egypt now, particularly after the revolution.

Tareq Imam published his first collection of short stories in 1995, when he was just 18. Since then, he has published several more short-story collections and novels. He’s received awards from the Sawiris Foundation and State Incentive awards; he was also selected for an International Prize for Arabic Fiction nadwa and won a top “Museum of Words” prize.

The best novel published in 2015, in my opinion, is The Black Battalion by the novelist Mohammed Mansi Qandil (Dar El Shorouk, Cairo), which centers on a 19th-century historical incident wherein a battalion of Sudanese soldiers is sent to Mexico to fight on the side of France in the era of Sa’id Pasha.

George Ritzer’s Globalization is the best book translated to Arabic in 2015. The author is an American thinker, and his book was released by the National Center for Translation. This book gives a holistic vision of what has bocame of globalization in the world today, from the angle of cultural criticism.

Zubaydah and the Monster is an anthology of stories of great writer Saeed Kafrawi.

The stories in Ghost Kite, by Hisham Aslan, are in my opinion the best stories in 2015, and also one of the best collections of short stories I’ve read over the years. The great little stories of the collection form, in the end, a large mural. 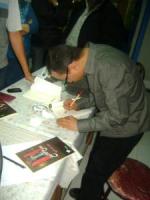 Egyptian novelist Mohammad Abdelnaby was longlisted for the 2013 International Prize for Arabic Fiction (IPAF) for his Return of the Sheikh. Abdelnaby, who has previously been known for his short stories, won the 2010 Sawiris award for his collection Anton Chekhov’s Ghost. He is also an acclaimed translator, having recently brought Hisham Matar’s Anatomy of a Disappearance into Arabic.

The Complete Works of the late great writer Edwar Kharrat.

READ: You can read a translated excerpt of Otared on Mada Masr. By the excellent Robin Moger. You can also read “5 by and about Edwar Kharrat,” who passed away earlier this month.

I Am Better, by David Foenkinos: The Arabic translation of this novel (from the French) is not optimal and has some gaps from the moral and religious provisions of the translator and publisher, but all this doesn’t obscure the novel’s exquisite discussion of physical pain as a director on the path to self-discovery and solutions in French contemporary life.

Revenge, by Yoko Ogawa: This chapters in this book at first look stand-alone, and closer to the short stories, but soon the reader discovers that everything is interconnected. These stories of revenge draw a different picture from the Japanese streets that we think are all built so well. Despite the chapters’ links to each other, they remain fragile, just like the small reprisals — which go as far as torture and murder — in each chapter.

This is a novel about the city and what changes when the population fails to communicate.

READ: Daoud won this year’s Naguib Mahfouz Medal for his previous novel, No Road to Paradise.

Mohamed Rabie is the acclaimed young author of the aforementioned Otared.

READ: You can read some of al-Barghouti’s poems in translation on Jadaliyya.

Allawzi is a Lebanese novelist and journalist, born in the city of Tripoli, Northern Lebanon. His novels Colorful Slaughters and Behind Darkness were published in 2011 and 2014 respectively.

About the Stars and Other Stories, by William Faulkner

Lina Nabulsi is a Palestinian writer. Her first book, Mama Expired, was published in 2009. Two more followed: Long Live the Republic of My Heart (2012) and Chocolate Planet (2014).

Beneath the Feet of Mothers, by Buthaina al-‘Issa

READ: An interview with al-Komi on Daily News Egypt.

Jordanian novelist Fadi Zaghmout’s debut novel, The Bride of Amman, appeared in English translation this year, by Ruth Ahmedzai Kemp. His second novel, Paradise on Earth, takes readers eighty-odd years into the future, imagining a Jordan where we have control over the aging process.

Edge of Eternity, by Ken Follet

READ: A review of Virgins of Londonstan.

Also, from Ursula Lindsay at Al Fanar: Recommended 2015 Books From and About the Arab World

7 thoughts on “10 Authors’ Favorites of 2015: The Year in Arabic Literature and Beyond”