Earlier this month, on August 2, a court in the small central-Moroccan city of Ouarzazate gave writer and philosophy professor Aziz Benhaddouch a two-month suspended sentence and a fine of 1,000 dirhams, with an additional 20,000 in reparations, on charges of “libel and defamation”: 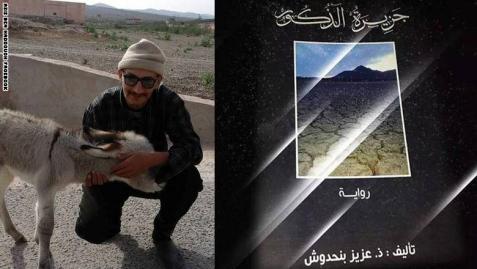 At issue was Benhaddouch’s 2014 novel The Island of Men. According to Telquel, it centers on patriarchy, mythology, and “ghost children,” or paper children, who have birth certificates but don’t exist, and are used to secure government benefits.

An initial complaint against the novel was filed in early 2015, apparently by fellow townspeople who felt the book was about them, although Benhaddouch denied basing his novel on real-world characters, according to reports in Telquel and CNN.

Benhadouch lives in Taznakht, a small town near Ouarzazate.

The Middle East Monitor reported that two NGOs, the Media and Expression Liberties Organisation and House of Wisdom, “criticised the prosecution in separate statements, calling it a ‘crackdown on freedom of expression and creativity.'”

According to ArtsFreedom, Benhadouch said in a statement that “this is the first conviction of its kind against a novelist in the history of Morocco,” and felt that this decision — using press law — could set a precedent to be used against other artists.

The author, who is also a philosophy professor, is reportedly currently in Agadir, appealing the ruling.

One thought on “Moroccan Novelist Sentenced to Two Months for Defamation”