In ‘Nour,’ Youssef Ziedan Returns To One of His Favorite Topics

Youssef Ziedan was briefly at the center of the literary spotlight. A long-time scholar, he won the second International Prize for Arabic Fiction (IPAF) for his historical novel Azazeel. The English version also won a Banipal Prize for translator Jonathan Wright.

His next novel, The Nabataen, was longlisted but not shortlisted for the IPAF, and his subsequent novels (Muhal, Guantanamo) earned less buzz. But Aisha Khalil says that this one, Nour, deserves a read: 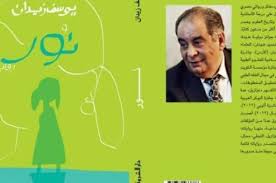 Ziedan, a long-time professor of Islamic philosophy, has lately turned to novel-writing. Nour is the final part of a three-novel series, preceded by Muhal (2012) and Guantanamo (2014).

In Nour, we are told the story of a minor character (Noura) which featured in a previous novel. Readers of Muhal and Guantanamo may remember Noura asthe lover of Mohamed Ibrahim, the Sudanese protagonist who is wrongly jailed in the infamous prison of the novel’s title. We were told then that pregnant Noura loses the trace of Mohamed Ibrahim and decides to marry her detestable fiancé. In Nour, we follow Noura’s life over the years till Mohamed Ibrahim’s release from jail.

Noura is a young single mother in her late twenties who has recently divorced and returned to her late father’s apartment. She lives with her daughter – also called Noura or Nour for short – in a poor Alexandrian neighborhood. She survives on a modest income from embroidery and enjoys a close relationship with her elderly neighbor, Tahia. Noura is a cultured, well-read Master’s student of sociology, but her material circumstances change only through strokes of luck.

After years of unemployment, and then only through a friend, Noura acquires a job as a secretary in a reputable construction consultancy firm. At nearly the same moment, the shabby apartments in which Noura and Tahia live suddenly acquire real-estate market value and their lives are transformed forever. Not only does material wealth befall them, but Noura also finds her intellectual bearings and suddenly unveils.

Tahia, Noura, and Nour move into a middle class neighborhood as a big, happy three-generational family. Nour now attends a French language school and Tahia is her caregiver, while Noura concentrates on her work and studies. Her life blossoms, and her new joyful reality is complimented by a fulfilling romantic relationship. Yet, for fears of losing her independence, Noura stalls her marriage plans, which drives her devote lover to travel.

But, as love is always a triangle in novels, Mohamed Ibrahim re-emerges. He approaches Nour, seeking to rectify his previous mistakes and reclaim Nour as his daughter. Noura refuses Mohamed Ibrahim’s plans, but she also declines her lover’s proposal to immigrate. Uncertainty envelopes her future, but the protagonist is ready to embrace the outcome of her decisions. Or is she?

With Nour, Ziedan returns to one of his favorite topics: women’s oppression in our patriarchal society. This theme was the subject of his novel Fi Dhal al-Af‘ha (In the Shadow of the Cobra) in 2006. While the struggle (between good and evil) in his earlier novel is purely intellectual, here it is more inclusive. There is a maturity in the depiction of the causes that lead to the oppression of women, and thus socio-economic and political circumstances are all featured.

Ziedan skillfully represents the pressures of the patriarchal society on the body of the (doubly) marginalized Noura. The young beautiful divorcee is subjected to sexual harassment and can only be protected if she conforms to societal norms. In exchange for societal protection, Noura is pressured into wearing the veil and loose clothing that hides her figure. For “this is a society that hates declared femininity,” as the author declares. The author also illustrates a despicable suitor reminiscent of Ghada Abdel Aal’s I Want to Get Married (2008). On the other hand, her lover is rendered as intelligent, handsome, rich, and caring, yet he is obviously not tempting enough to induce Noura out of her country.

Zidan’s poetic approach to language stands out in describing various love forms: maternal love, parental love, friendship, and intimacy. He starts on a warm scene of Noura attending to the needs of her toddler. The warmth and bliss of this small poor household is vividly contrasted to the cold rainy night outside. The language is graceful and agile, reflecting the cognitive state of a gratified young mother, and turns stiff as her circumstances change.

Professional Noura is represented through detached description that suddenly becomes poetic again when it reflects the warmth in her romantic relationship.

Ziedan also doesn’t fail to indulge in intellectual discourse, as he seems to enjoy, which he does here through a minor character: Noura’s sociology professor. Through him, Ziedan plunges, more naturally, into his favorite role – as an educator.

It is not quite clear the extent to which Noura (or even young Nour) is meant to be allegory for Egypt. She has, after all, refused both the Islamic and Western options, and remained confident of her ability to devise her own way in spite of her dubious future. In which case, Egypt awaits strokes of luck to transform her existence in similar way.

Aisha Khalil Nasser holds a PhD in Middle East Studies from Exeter University, and has recently completed an MA in Women, Gender, and Sexuality Studies from Oregon State University. Her research interest is in Cultural Studies and women in the Middle East.

One thought on “In ‘Nour,’ Youssef Ziedan Returns To One of His Favorite Topics”