Over at the Library of Arabic Literature (LAL_) website, Phillip Golub — a composer on the M.Mus course at the Guildhall School of Music & Drama in London — writes about his choral piece, The Necessity of what is Unnecessary, was inspired by Abū l-ʿAlāʾ al-Maʿarrī’s verse: 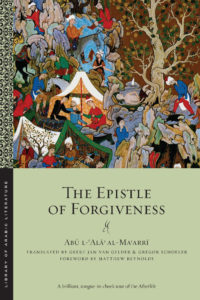 The work, designed for six singers, will be premiered today by the EXAUDI Vocal Ensemble conducted by James Weeks in Milton Court Concert Hall.

At the LAL site, Golub gives his thoughts on the relationship between politics, music, and The Epistle of Forgiveness, which he learned about from a Palestinian-Lebanese violinist. He writes:

When a chorus of voices sings words, I take the ensemble to be something of a cross-section of the society. The words in a choral piece carry a weight that, in my view, is different from the more personal medium of the solitary singer on stage because of the sheer number voices we perceive. It is public music.

In my contemporary work, I treat these tetrachords as found artifacts, rather as I have approached al-Ma’arri’s translated words. What I find so exciting about them is that, when re-contextualized, these musical artifacts begin to similarly defy clear answers to questions of musical-cultural origins. What I have done is to take these tetrachords—these groupings of four notes, that is—and have the pitches sound all at once. This makes them into harmonic clusters of notes, instead of melodic sequences of pitches. The result is a sound nothing like what one would ever find in traditional Maqam music. Instead, the sound closely resembles contemporary techniques, originating mostly in France, called “spectralism.” Composers who follow this school are interested in the natural resonance of sounds, causing them to write notes in their music with very specific tunings, also outside of Equal Temperament.

The whole essay is at the Library of Arabic Literature.