It’s publication day for Muhsin al-Ramli’s The President’s Gardens, and translator Luke Leafgren has offered to share one of his copies with an interested ArabLit reader: 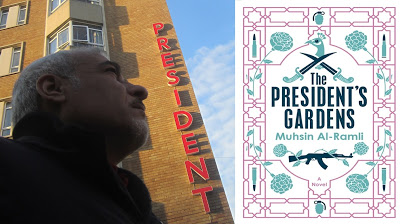 If you would like a copy, throw your hat into the comments below, and we will choose (randomly) from among them.

While you wait, read a review of the book by ArabLit’s Valentine Viene, which opens:

In 1990, Iraqi author Muhsin al-Ramli got a personal taste of Saddam Hussein’s iron grip: His brother, Hassan Mutlak, a celebrated poet, was hanged for attempting a coup d’état. Al-Ramli fled Iraq as soon as he could, although he first had to complete his military service, or else he risked imprisonment. After a period in Jordan, al-Ramli settled in Spain in 1995. In 23 years of exile, every single piece of work he has produced has been about Iraq. At an event organized by Banipal magazine in London this January, al-Ramli said he would continue writing about his homeland as long as it was riven by conflict. Keep reading the review.

The characters in The President’s Gardens also come to know what it means to challenge Saddam Hussein. About his brother, assassinated in 1990, al-Ramli said in an Al Jazeera profile: “I have always been influenced by him, I am a student of Hassan Mutlak and I feel that I owe him everything I know, for when the Iraqi regime decided to take away his life, they deprived the world of a great voice, and I feel its my responsibility to bring out this voice again.”

The President’s Gardens is al-Ramli’s third novel translated into English. His first, Scattered Crumbs (2000), was translated into English by Yasmeen al-Hanoosh, and won the Arkansas Translation Award. (Read an excerpt on al-Ramli’s blog.) His second novel, Fingers of Dates (2008) met with wide acclaim and was longlisted for the 2009 International Prize for Arabic Fiction. It was also translated by Luke Leafgren and published by AUC Press; Alexandra Atiya previously interviewed him about this novel for ArabLit.

In the Al Jazeera profile, al-Ramli also spoke about translation:

With respect to the translations I have written, apart from my books, I would not be exaggerating if I said that I have translated hundreds, if not thousands of other short texts, and all of them were of the literary genre. Translation from one language to another for me is a second mission. I find it necessary, and at times I also find myself obliged to translate, because although my main mission and dream is to dedicate myself exclusively to creative writing and literature, I understand that part of my duty is to translate from Spanish to Arabic and vice versa because I am fluent in both, and I find it important for me to complete this service between the two languages and the two cultures.

Again, to enter the drawing, simply add any comment below, although preferably something to distinguish yourself from a bot. This is open to anyone worldwide.