‘Whose Face is Huge and Wears a Hideous Expression’: On David Larsen’s Translation of ‘Names of the Lion’

Back in 2011, The Economist complained it wasn’t possible to get a copy of David Larsen’s translation of Names of the Lion “for money and possibly not even for love.” But, this month, Wave Books has come out with a new edition.

Sarah Irving writes that it’s unlikely Larsen’s new edition of Al-Husayn ibn Ahmad ibn Khalawayh’s tenth-century Names of the Lion is going to shoot the translator-poet to global renown — but that it should: 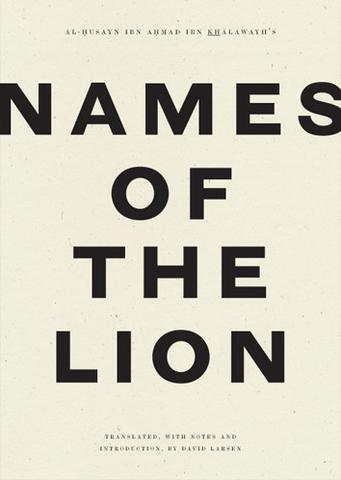 Googling David Larsen for this review, I came across a blog post (on his own poetry, not his translations of early Arabic literature), which commented that “It’s a mystery why David Larsen doesn’t have a larger following”.

That post was from a decade ago, and yet for some reason Larsen still isn’t some kind of literary superstar. The world’s unfair. Who knew?

It’s unlikely that his edition of Al-Husayn ibn Ahmad ibn Khalawayh’s Names of the Lion is going to shoot David Larsen to global renown. Translations of obscure tenth-century Arabic lists of words don’t generally have that effect, even when they are published by delightful indie publishers (Wave Books, in this case) which launch them on the world in aesthetically pleasing, viscerally satisfying, tasteful, tactile cream-papered booklets.

And as for the text itself: Surely this blend of gloriously geeky scholarship (about half of each page is footnotes) combined with the several hundred whimsical, hilarious, gorily descriptive and downright bizarre names for the lion, collected by Ibn Khalawayh and translated and explicated by Larsen with such aplomb, should be a bestseller?

To be more precise and less flippant, this slim book opens with Larsen’s introduction, a brisk run through Ibn Khalawayh’s biography (mainly as a court scholar and tutor in Baghdad and Aleppo, punctuated by arguments with al-Mutanabbi, described by Larsen as “the greatest Arab poet of his day as well as the greatest megalomaniac”), followed by an account of his works: poetry, scholarship and, best-known, his word-lists. These last include “The Names of the Serpent,” “The Book of Trees,” “The Names of the Hours of the Night,” and “On the Names of the Wind.”

After a foray into some grammatical and linguistic aspects of Ibn Khalawayh’s work, which may well alarm those not acquainted with these angles on Arabic, we then get a brief exploration of the cultural significance of the Asiatic lion – the variety with which the compiler of this list, and most of his sources, would have been familiar. Larsen gives us some excerpts from other Arabic writings on this splendid beast, and adds a bittersweet footnote with the information that from a range that once spanned lands from the Mediterranean coast of Syria to eastern India, the Asiatic lion is now reduced to just a few hundred individuals in a small area of Gujarat. Human beings (with rifles) are, of course, the culprits.

And then we get the main event, the actual list of hundreds of names by which the lion has been described in Arabic literature and lore. Some celebrate the creature’s beauty: “Whose coat is the color of the early Morning,” “Father Saffron.” Others recall its ferocity: “Whose Touch is Fatal,” “Who Plagues the Herd,” or simply “The Smasher.” Or those that seem to taunt it, such as “Whose Face is Huge and Wears a Hideous Expression.” Some are simply plain bizarre: “Frowny Face’s Father.”

The list is heavily footnoted. Larsen adds to Ibn Khalawayh’s own annotations about provenance and variations of meaning with his own research into centuries of Arabic and Western scholarship to explain the origins and resonances of each term. It’s obviously a huge piece of labor, and utterly fascinating.

The collection concludes with an excerpt, which also appears in the original, of a piece of early Arabic poetry said to have been performed before the Caliph Uthman (577—656AD). The verses, told from the perspective of a camels of a caravan crossing the desert, reflects the fear which hunting lions must have inspired in the days when they were much more plentiful and human beings were much more lightly armed.

If you can, it is well worth getting hold of Wave Books’ lovely paperback editions of The Names of the Lion, as an aesthetically beautiful book, an entrancing piece of literature, and an intriguing, even for the non-specialist, work of scholarship.

If that’s not possible, the internet has plenty to offer those wanting to explore David Larsen’s translations and explications of early Arabic literatures. These include “A poem by Abu Sakhr al-Hudhali, as transmitted by Abu Ali al-Qali,” “A qaṣīda in praise of Salāma Dhū Fā’ish,” and an excerpt from al-Suyuti’s “On the Merits of the Housecat.” More academic or broadly exegetical writings include “Signs, Omens, and Semiological Regimes in Early Islamic Texts” and “Elemental Love: Abū Ṣakhr al-Hudhalī and Mary J. Blige.” More is available on Larsen’s own blog and academia.edu page, to which he has, most recently, uploaded a pdf of The Names of the Lion.

Maybe the world isn’t always so unfair after all. To readers, at least.

Sarah Irving [http://www.sarahirving.co.uk] is author of a biography of Leila Khaled and of the Bradt Guide to Palestine, and editor (with Henry Bell) of A Bird is Not a Stone: Palestinian Poetry Translated into the Languages of Scotland. She is currently lecturer in modern Middle Eastern history at Edge Hill University.”

4 thoughts on “‘Whose Face is Huge and Wears a Hideous Expression’: On David Larsen’s Translation of ‘Names of the Lion’”