The work of Saniyah Saleh was underappreciated in her lifetime, but has undergone — or is undergoing — a small renaissance, as it appears in a recent book on motherhood by the great Egyptian poet Iman Mersal: 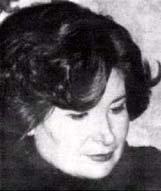 This week, translator Robin Moger has brought us two translations of Saleh’s work.

The first was very short poem, “Some Thing,” from Salih’s 1970 collection حبر الإعدام, or Execution Ink, opens with the question, “What do you do in time of war?”

The second, “The Storm Takes the Heart,” appeared on Youssef Rakha’s website, named for his seminal novel The Sultan’s Seal. This poem opens:

What does that glum sun search for in its useless

round and why does its purple body come apart

and endless discs come tumbling down from its

whose eyes aglow with tears we barely glimpse, they come

out from the graves of the forefathers and make for Jordan.

Salih was born in Misyaf, in northern Syria, and her own mother died young. Her poetry appeared in the premier magazines of her time, particularly Shi’r and Mawaqif, but remained in the shadow of work by her husband, the poet Muhammad al-Maghout. Her later poems often address her relationship with her two daughters, and many were written during illness.

An excerpt of a poem dedicated to her daughters Sham and Sulafa “You Will Go Out of the Body’s Walls,” was translated by Issa Boullata.

Salih died from cancer of the blood in 1995, at just 56, leaving many unfinished poems and two collections, published in 1964 and 1970. Like pioneering Iraqi poet Nazik al-Malaika (1923-2007), Salih as yet has no collection translated into English.

3 thoughts on “Friday Finds: The Poetry of Underappreciated Saniyah Saleh”