Khaled Osman’s debut novel, Le Caire à corps perdu (2011), was a finalist for a prestigious Prix Gitanjali. An excerpt of his second novel, La Colombe et le moineau (The Dove and the Sparrow), has been translated below by Alexandra Piscionere. Osman a number of awards for his fine translations of authors such as Naguib Mahfouz and Gamal al-Ghitani:

La Colombe et le Moineau (The Dove and the Sparrow) by Khaled Osman tells the story of an Egyptian man named Samir who has been living in France for a number of years.  When he left Egypt, he left behind a world that he tried to forget – that is until a phone call in the middle of the night forces him to confront his past and to question everything he thought he knew about himself.  Osman introduces us to characters who are deeply flawed, deeply heroic, and deeply human.  Through them, he explores what it means to embrace multiple identities while achieving the equilibrium that we all strive for. 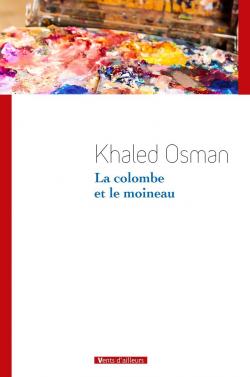 These days, he was spending most of his nights glued to the news bulletins reporting on the erupting revolution in Egypt. There was hardly a morning when he managed to get even one or two hours of sleep.  It was during one of those rare and fitful moments of rest that the phone rang.  While groping for the receiver on his bedside table, he caught sight of the alarm clock. The bright red digits burned in the darkness: 4:53.  Finally, he somehow managed to pick up the phone.  The connection was faint, but the loud voice on the other end could clearly be heard above the indistinct hubbub in the background.

The man spoke in Arabic tinged with an Upper Egyptian accent.

“I apologize for phoning you like this, but I’m calling from Tahrir Square.  I can’t describe to you the utter madness that I’m witnessing here.  There is a man next to me who was a bit rattled in a clash with the Central Security Forces.  I had some colleagues help me drag him as best we could to a tent where some doctors have set up a makeshift hospital, but we didn’t know how to contact his family – he didn’t have any form of identity on him, and his cell phone must have been snatched from him during the…”

“Excuse me, but what do I have to do with this…”

“Sir, if you will allow me, please let me finish.  If you please.  The individual was rather traumatized, but even so, he had the wherewithal to show us a little pocket stitched into the lining of his jacket.  Inside was a small piece of paper folded over twice.  Scribbled on it was a phone number and a note: Number for Samir in Paris.

“Hello? Sir, are you still there?”

“Yes, I’m listening, but I can’t think of anyone in Egypt who could have my number here.  I’ve severed any ties I’ve had to that country quite a long time ago.”

“Yes, well…You would know more about that than I would.”

“Did he say anything?”

“Yes, but I am not sure whether I fully understood him, as he was spitting up and coughing more than he was talking.  If I understood correctly, he wants to see you, but not only you…He said something else like, ‘Tell him to come, but only if he brings her with him…’ This phrase, ‘if he brings her with him,’ he repeated several times, and you could see that he had tears in his eyes.  And then, just like that, he fell silent, and no one was able to get another word out of him.  The team of doctors is trying to get him back on his feet…”

“I have no idea who this man could possibly be.  Can you describe him to me?”

After hanging up the phone, he tried to go back to sleep.  However, any chance of sleep escaped him after the emotion that this unexpected call provoked in him, suddenly awakening his haunted past.  A past that, for all these years, he had grown accustomed to pushing to the furthest depths of his conscience.

If truth be told, he was only pretending not to know the identity of the injured man.  A troubling intuition had taken hold of him from the very beginning of the call.  When the man on the phone had begun to paint a less than vague portrait of this individual lying before him, Samir acted defensively: What was he supposed to make of this police sketch that could have matched millions of Egyptians?  With a description like that, this injured man could have been anyone: a cousin, a friend, or…well…a perfect stranger.

He was ready to cut the conversation short when the man on the other end divulged one last detail – a scar over the right eyebrow – that had removed any doubt.  Not that he had had any in the first place.  He had instantly recalled the time a mischievous twelve-year-old had split open his brow by jumping between two branches of a tree that formed a “Y”; no doubt to honor some stupid bet.  For a long time, this gash had been the only way for strangers to tell them apart … Now, he had no choice but to admit that, yes, he knew this man.  Hicham.  The man who had shared his childhood, with an intimacy that he had yet to find in any other human being, even if their paths would later irreversibly diverge.

“Samir Efendi, are you still there?” the solemn appeal brought him out of his trance.

“I don’t know whether you’re a friend or a relative or what, but someone needs to notify his family right away.”

He had a brief moment of hesitation.

“I am his family,” he finally answered, avoiding any further explanation.  “Give me your phone number.  I will do what I can and call you back as soon as possible.

He noticed as he wrote down the caretaker’s number that his hands were trembling.

About the author: Khaled Osman is an Egyptian author living in Paris. He is a celebrated Arabic-to-French literary translator who has translated works from many Egyptian authors.  He wrote his first novel in 2011 entitled Le Caire à corps perdu.

About the translator: Alexandra Piscionere is a French translator who is passionate about making French-Arab literature accessible to the English-speaking world.  She is also a human rights attorney based in New York City and holds a BA in International Affairs from the Elliott School of The George Washington University.