It’s been ten years since the original hardback of Contemporary Iraqi Fiction: An Anthology was published, ed. and tr. Shakir Mustafa. This collection of thirty-odd stories and novel excerpts was the proximate cause of ArabLit, and is now being reissued as a paperback: 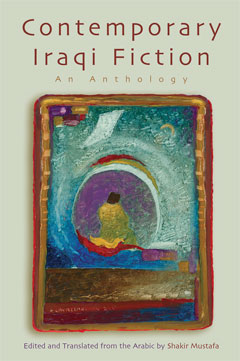 In celebration of the re-release, Mustafa answered a few questions about the collection, ten years on.

If you were going to revise the introduction in 2018, ten years later, is there anything you would add to your comments for the 2008 edition?

​Shakir Mustafa: Yes. I’d not only introduce new stories, but also comment on writers​ ​who became visible and influential in the post-invasion era. Muhsen al-Ramli and Hassan Blasim are among those worth translating.​

If you could add more short stories that you’ve come across in the last ten years, what would they be? Something by Hassan Blasim? Luay Abbas? Others?

SM: These are writers and works deserving of attention. Hadiya Hussein, Inam Kachachi, and Aliya Mamdouh are other writers whose work is relevant and worth sharing with wider readerships. I have actually translated some stories by Hadiya Hussein that I’d like to publish. ​

Are there new works by the authors included in this collection that you’d highlight or draw attention to?

SM: One book I like to see translated is Muhammad Khudayyir’s “Facial Gardens” حدائق الوجوه​, ​in which he perfects the tradition of blurring lines between reality and fiction, biography, autobiography, and fiction in the fashion he pioneered in Basrayatha.​

I am a big fan of Basrayatha, and I’m sure I sought it out because I discovered Khudayir in your collection. Do you look for short stories in different places now than you did 10, 15 years ago?

​SM: Yes, thanks to numerous websites, I can find fiction as soon as I become aware of it, or as soon as it is published. A blessing with no qualification.​

Why did you choose to open the anthology with Khudayyir? I remember how these stories — and Basrayatha — marked me, with their outrageous inventiveness and lyrical murmurings, and am continually surprised that there is no collection of his stories in English​​.

​SM: Khudayyir’s choice was a personal issue. I remember reading “Yusuf’s Tales” the day it appeared in a newspaper in Iraq and I was moved by it in a way not unlike the way the English version moved you.​ ​I decided then to translate Muhammad’s works when I was capable. That there’s no collection of short stories by Khudayyir is a shame. Michael Beard and I  flirted with the idea of translating Khudayyir’s stories, and it might be a good time to revisit that idea.​

SM: There must be a number of critics who can better address this question. In translation studies, choice of text is still a source of endless debate. We like texts and we translate them, but we also think of introducing what’s different, more relevant, more imaginative, and so on. ​I have always been text-oriented, so it really makes little difference where a writer comes from. I wanted to translate Iraqi writers because they were less visible, but now thanks to several translators — especially William Hutchins — Iraqi writers are getting more attention.

I also remember being particularly struck by Samir Naqqash’s “Tantal,” a story about the magic of storytelling, of creation, of the things that fade away and those that mark us forever. Why did you choose that one from among all the stories in Ana w ha’ula’ w al-fisam?

​SM: “Tantal” is one I immediately loved​ after reading it in Arabic. When I got in touch with Samir Naqqash, he told me it has already been translated, but he was such a generous human being and told me to go ahead and translate it.

SM: I have used the collection in my Intro to Arab Culture course, and students like numerous stories. Although I have study questions for a number of them, students always find ways to look at things I haven’t thought about, the way they do​. And in class, I tend to forget that I translated these stories — it has been a while!

I seem to find fewer Iraqi stories, novels, and poems in the US classroom than I do Egyptian, Lebanese, and Palestinian. I would think US classrooms would be filled with Iraqi literature post-2003. Why aren’t they?

SM: I’m as surprised as you are! There’s more interest in Vietnamese matters in the States now, so perhaps in a generation or so, Americans might be more willing to look at Iraq away from the blunders of the past.​

You also use excerpts from novels… For instance, a section from Abdul Rahman Majeed al-Rubaie’s The Tattoo. What made you want to include novel excerpts in addition to stories? Do you think they function differently? Has The Tattoo since been published in Iraq?​

SM: That decision, at least in part, was due to the intention of introducing more writers, and there were those that I liked more as novelists rather than short storytellers.​ I also though of sharing texts with readers of English. It was a thrill to see William Hutchins’ translation of Basrayatha after I published my translated excerpts. The Tattoo is available in Iraq now, but I’m not sure if there’s an Iraqi edition. The last time I corresponded with Al-Rubaie, probably ten years ago, he told me the novel appeared in a Tunisian 6th edition.

Shakir Mustafa is a teaching professor of Arabic at Northeastern University. He co-edited A Century of Irish Drama: Widening the Stage and Seventeenth-Century English Poetry: An Introductory Course.