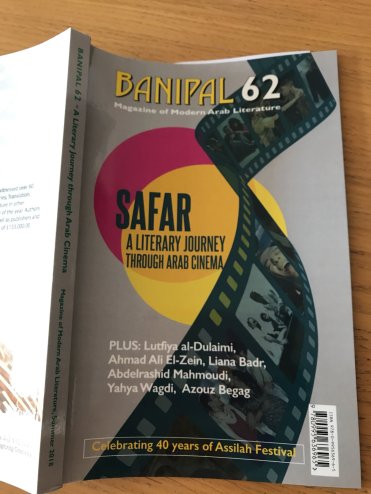 2018 has been an exceptional year for Arab cinema, which has been celebrated at some of the world’s most prestigious film festivals, from Cannes to Locarno. And as Middle Eastern productions increasingly turn heads, a UK festival dedicated to screening Arab films is taking the challenge one step further, daring to showcase a diverse selection of films that will surprise both western and Arab audiences.

What started off six years ago as a way of transporting audiences –­ Safar literally meaning “travel” in Arabic – to the oft-misrepresented cultures of the Arab world through the immersive form of cinema, has since grown into a revered platform for championing the region’s talents.

“Part of the magic of cinema is the invitation to travel to other parts of the world, and how the boundaries of otherness disappear with that travel,” says Nadia al-Sebai, Executive Director of the Arab British Centre, which has been running the biennial Safar Film Festival since its inception in 2012. Now in its fourth edition, SAFAR prides itself on being the only festival in the UK solely focused on programming Arab cinema.

Whereas former editions have focused on popular and contemporary cinema, this year’s theme is shifting to literature and storytelling in cinema, a pairing al-Sebai says has always enjoyed “a symbiotic relationship”.

But it’s not all about building bridges. At least not anymore, argues Joseph Fahim, renowned Egyptian film critic and the curator of Safar 2018. Safar is a chance, says Fahim, for a shift in the paradigm.

“From a historical perspective, I think these movies are fascinating to watch. But first and foremost, we want people to watch different movies, different stories from the Arab world with different aesthetics, to be entertained, to be challenged, to make them curious to see these Arab movies,” Fahim said.

A bold statement reflected in the diversity of the festival programme, which sees both popular and lesser-known classics showcased along contemporary works by both established and rising directors.

Taking a broad-brush approach with this year’s theme of Literature and Storytelling, Fahim included films that utilise literary devices in his selection. Iraqi director Koutaiba Al Janabi’s recently completed documentary, Stories of Passers Through, draws on elements of autobiography including self-authored narrative and family history to tell stories of displacement and Diaspora. The culmination of over 30 years of filming and screened in its European premiere at Safar 2018, the documentary chronicles the stories of Iraqis who, like Al Janabi, were forced out of their homes and country.

Other films take an even less literal approach to the theme; Georges Hachem’s 2016 feature from Lebanon, Still Burning, about a filmmaker living and working in Paris, who is forced to confront long-repressed memories following an unexpected meeting, explores storytelling in a multidimensional manner. The plot follows André as he films his own feature, creating a narrative within a narrative as the lines between reality and fiction are duly blurred.

More traditional forms of storytelling are explored in Zeina Daccache’s Scheherazade’s Diary, filmed in 2012 around a drama therapy and theatre project the Lebanese director and drama therapist led at the Lebanese Baabda Central Women’s Prison in south-eastern Beirut. Daccache asked the female inmates to use storytelling techniques drawn from the One Thousand and One Nights folk tales, a collection of largely Middle Eastern and South Asian folk tales compiled in Arabic during the Islamic Golden Age to confront their own realities.

More than half of the dozen films showing at Safar 2018 are book adaptations, but even these are far from mainstream. The 1999 Egyptian production, Fallen Angels Paradise, by director Oussama Fawzi is a dark, metaphysical exploration of life and death based on a Brazilian short story by Jorge Amado. The film chronicles the events of one long night after a formerly successful man overdoses in a dingy Cairo bar. His corpse is then fought over by the gang he had been living with and his wife and daughter who he had abandoned 10 years earlier, along with his Coptic Christian life. Though it has gained a cult following in Egypt, the film is not well known outside the country.

This year’s festival opened with the star-studded Egyptian classic, El-Tareeq, or The Search, by Egyptian director Hossam El-Din Mostafa. Based on a novel of the same title by Nobel-prize winning Egyptian author, Naguib Mahfouz, the 1964 film noir tells the story of Saber al-Rehimy, played by the late, renowned Egyptian actor Rushdy Abaza, as he forges a doomed path of discovery that eventually leads to his demise. Throughout the film, Al-Rehimy searches for his wealthy father to save him from potential ruin after his mother, who had been running a number of brothels unbeknownst to him, is arrested. Torn between two love interests that see him constantly shift between being the hero and the villain, Saber struggles to shed his idle and philandering past, no matter how strong his desire. In a poignant scene with Ilham, played by the ‘Cinderella of Egyptian cinema’, Souad Hosni, the respectable young journalist he falls for, as the couple look out at an imposing city landscape from the top of the Cairo tower, Saber attempts to articulate his predicament: “It’s strange. Since I’ve come back to Cairo, I keep seeing how high and far everything around me is.”

“It’s idleness that’s making you see things that way,” Ilham responds pragmatically, yet Saber fails to overcome his past to follow her path to redemption.

The festival is not only celebrating adaptations; the books that the films are based on are also being honoured at the festival, some of which remain relatively obscure. The 1973 Tunisian production, In the Land of Tararanni, an anthology film comprising three distinct segments, is an adaptation of a short collection called Sleepless Nights by Ali Douagi, an author dubbed the forefather of the Tunisian short story. The 2012 Moroccan feature Horses of God by Nabil Ayouch, a story inspired by the 2003 Casablanca suicide bombings, is an adaptation of The Stars of Sidi Moumen, by Mahi Binebine, who is taking part in the Q&A discussion following the screening.

One of this year’s Safar partners is Banipal, a magazine of modern Arab literature, which is celebrating 20 years of publishing this year. Banipal publisher Margaret Obank said she was especially excited by this year’s theme.

“Many of the literary adaptations are works by major authors, some world renowned through translations such as Naguib Mahfouz and Ghassan Kanafani, others virtually unknown in the West, such as Tunisian author Ali Douagi, and Algerian novelist Mouloud Mammeri. So it’s great to bring these authors to the fore for 21st century audiences through the films.”

Even adaptations that gained some popularity, Fahim points out, are rarely discussed within the region.

“[Literary adaptations are] one of the least discussed and explored aspects of Arab history. When any scholar touches upon Arab cinema literary, adaptations come as a footnote.”

“[It] presents a fascinating reflection of the history of each Arab country. In Egypt in the mid-50s, adaptations were derived from a desire to strengthen national identity and reclaim it from colonial rule but that was not the case with each Arab cinema. It differs from one period to another and one cinema to another and one country to another. Algeria didn’t even have Arabic novels until after the Algerian war,” Fahim added.

The festival’s closing night sees another Egyptian classic with the World Premiere of a newly restored version of director Youssef Chahine’s The Land (1969), adapted from Abderrahman Charkawi’s novel of the same name. Set in the 1930s, the film chronicles a group of farmers struggling to protect their land from feudal control. One of Chahine’s most beloved works and a drama beset by nationalistic patriotic emotion, The Land  was released during the presidency of Gamal Abd El Nasser, seen by many as a champion of the cause of Egyptian peasants and workers.

Getting hold of the films was one of the biggest obstacles faced by Fahim, who navigated bureaucratic and archiving hurdles in order to present this year’s programme.

“[Joseph Fahim] has provided us – in many cases – a very rare opportunity to see films that have never screened in the UK before. I don’t think we’ve ever worked as hard as we have on this festival to obtain classic films that illustrate the best of literary adaptation in Arab cinema…so this really is a one of a kind festival!”

As well as a diverse selection of short films, there is much to discover. The Egyptian feature, Poisionous Roses, directed by Ahmed Fawzi Salef, is a lyric adaptation of a 1990 cult novel, Poisonous Roses for Saqr, by Ahmed Zaghloul Al-Sheety, portraying a little-seen lower-class district of Cairo.

Several of the screenings at the festival have been sold out, including the recently released Palestinian feature, Wajib, a 2017 father-son Palestinian film by director Annemarie Jacir. This latter tells the story of a former PLO fighter and his estranged son, who has returned from Rome to help with his sister’s wedding, as they embark on a road-trip across Nazareth to hand-deliver the wedding invitations, as part of their wajib, or “duty”.

According to Fahim, this is just the tip of the iceberg; a rich and diverse catalogue of classic and contemporary Arab cinema is waiting – and deserves – to be unearthed.

Nashwa Gowanlock is a writer, journalist and literary translator. She has translated numerous works of Arabic literature, including a co-translation with Ruth Ahmedzai Kemp of Samar Yazbek’s memoir, The Crossing: My Journey to the Shattered Heart of Syria and a translation of the multi-author novel Shatila Stories. Nashwa holds an MFA in Writing from the Vermont College of Fine Arts.