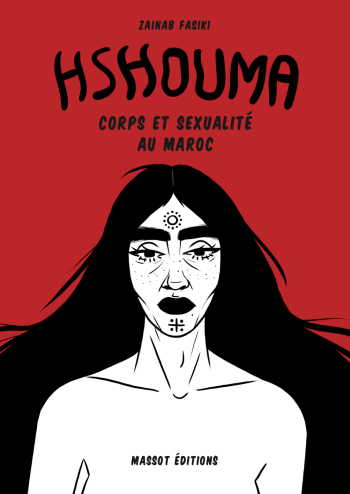 From the early 20th century through the 1970s, when the brilliant feminist Fatima Mernissi began publishing her books and was an inspiration to so many women, to the reforms made to the Moudawana, or family code in 2004, Moroccan feminists have been leading an uphill battle seeking legal changes to the status of women’s rights.

Although there has been movement, such as the February 2018 law  criminalizing violence against women (which many say falls short), for real progress to be made within daily life is another matter. “In my country our bodies and sexual relations are regulated by the country’s laws, but also by Islam, Moroccan culture, and family and social customs,” writes Zainab Fasiki, a young comics artist and mechanical engineer who recently presented her graphic novel, Hshouma, Corps et Sexualité au Maroc (Hshouma, the body and sexuality in Morocco) to a packed room, despite transportation strikes, at Paris’ Institut du Monde Arabe.

Fasiki’s book, printed in black and white and red “for the blood of all the victims” is illustrated in bold strokes and is in effect, exactly what it says it is—a manual about bodies and sexuality, which are not one and the same Fasiki underlined.

The women she draws are young, old, slim or less slim, and, in a country that has perfected the art of waxing, notably hairy.

“When I was eight or nine, I went to a public hammam for the first time. It was WOW. I had never seen naked bodies before and it was such a discovery, this beautiful diversity of bodies.”

Born in 1994 in Fez, Fasiki is the only girl among five brothers. She chose the name “Hshouma” for her book, which means “shame” or “shameful” in Moroccan Darija, “because this word traumatized me,” Fasiki said. “People are suffering under this regime of hshouma; it’s a reign of hatred.”

The majority of Moroccans think that hiding bodies, restricting sexuality and freedoms maintains the social order and gives value… We must talk about our co-existence, so that there is no more hshoumaabout these subjects: we are living a social and sexual crisis that we must resolve.

Fasiki starts Hshouma off by positing that male domination began with the Muslim conquest of North Africa. The Amazigh, she writes, accorded great respect to women. When the Arabs took control of the region, they defeated the warrior queen Dihya Tadmut, also known as Kahina. When Fasiki was asked why she had published her book in France, she said that several Moroccan publishers had initially contacted her, but that they had wanted her to make changes to her text, and one of them was to remove the paragraph about the Amazigh. Her publisher, Éditions Massot, distributes Hshouma to Morocco, Tunisia, Algeria, Lebanon, and Egypt.

Trained as a mechanical engineer, Fasiki drew technical drawings by day and comics at night. As a teenager, she became increasingly frustrated with her status as a woman and published a drawing of herself naked on social media, which was “therapeutic,” she said. In 2014, when she moved to Casablanca for her studies, she joined a comics collective where, “I learned everything. It was like going to arts school.”

Franco-Iranian graphic novelist Marjane Satrapi’s Persepolis was “the number one inspiration for me. It was thanks to this book that I draw.” But she was also inspired by Algerian cartoon artist Slim, and the Moroccan author Abdellah Taïa, who writes openly about being gay — and, of course, the Amazigh queen, Kahina.

She had already published a comic with the Beirut-based Tosh Fesh called Feyrouz Versus the World, in which she touches on the physical restrictions imposed on women. “The MENA region is like one big country because for a young girl the social and moral codes are the same as well as the restrictions and this inspired me to write Feyrouz,” said Fasiki. 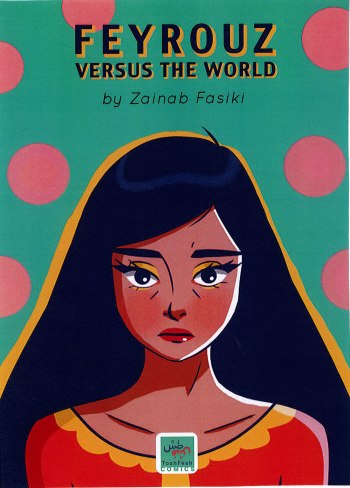 In 2018, after an artist’s residency in Spain, she produced a short comic called “The Essentials of Sex Education” in an issue of the Moroccan Skefkef comics magazine, which launched her project, Hshouma, which then became a book published in August 2019, which is already being reprinted.

Fasiki was surprised at how well her book was received in Morocco. “I’ve only had positive reactions.” Parents came to her book signings and bought the book for their children. In Darija, Fasiki said, “there is a problem with vocabulary. There are no words for breasts or vagina, for example. The ones used are ‘dirty,’ or hshouma. In Arabic you have the words, but in Morocco more than half the population speaks [only] in Darija, and we can’t even describe our own bodies.”

Fasiki leads workshops using her book Hshouma and hopes that a vocabulary can be developed for genitals in Darija that is acceptable. She recently heard that in Tangiers the word used for vagina translates to mean the soul, which she quite liked.

In January 2018, Fasiki founded a collective called Women Power, which provides residencies to women artists and focuses on women’s empowerment. The collective takes place in Moroccan filmmaker Nabil Ayouch’s studio. Ayouch’s 2015 film, Much Loved, which follows the lives of four Moroccan prostitutes, was banned in Morocco, and the filmmaker and actors received death threats. The lead actress was beaten before she fled the country.

I’m not challenging the existing mindset in my country for fun…If you think I’m exaggerating, I’d like you to try being a woman in Morocco for a day. Then you’ll tell me how you lived this experience.

If I’m taking up a pen, it’s not for the pleasure of criticizing my society, but because I want it to be better, that it be founded on peace, letting everyone live as they see fit, and of course because I love Morocco and Moroccans.

A comic by Fasiki originally published in 2017, Omor, (Things), which follows the lives of three Moroccan women will be re-worked and published in 2020 by Éditions Massot, which also publishes the feminist comics artist, Emma, who is known in English for her work The Mental Load.

The 25-year-old Fasiki says she knows change will take time. “There’s a community in Morocco that’s ready, but not everyone is. My struggle is for the next generation.”

Olivia Snaije is a Paris-based journalist and editor. She has written several books on Paris, co-edited the photography book Keep Your Eye on the Wall: Palestinian Landscapes, and translated Lamia Ziadé’s Bye Bye Babylon.