‘No Way But The Way’

– It’s heart-warming to see Sargon’s voice transmogrify in so many ways and across four languages; and

– My choice of entries has less to do with my assessment or preferences than a general sense of balance. I would definitely encourage readers to seek out the ones not included here.

Commenting on the initial post, a friend of mine was kind enough to suggest that my more or less literal version didn’t require too much improvement to work as an adequate translation of the poem, and I want to start with a rather subdued version that strikes a tone very like the original’s.

cleansing itself at the fountain of ablutions

while people crossed the streets asleep

It seemed my dreams were pyramids of sand

And i glimpsed my day slipping away

far from that cursed city

in the opposite direction

We choose the beginning

But the end chooses us

And there is no way but The Way

Similarly, Matt Boot’s version is both conservative and clever:

Another attempt that stays close to the original is Mishka M. Mourani’s:

When I saw Death

Cleansing himself at the fountain,

And the people around me

Sleepwalking in the streets,

My dreams appeared as pyramids

Collapsing before my eyes.

I glimpsed my day

From the damned City.

We choose the beginning

But the end chooses us

There is no other road

An entirely different, slower rhythm can be heard in Rachel Schine’s approach:

Another version that takes freedoms in a different way is Tim DeMay’s:

Then I saw Death make wudu in the fountain

and those around walk the streets asleep —

my dreams seemed pyramids of sand

and from the corner of my eye

the daylight fled opposite this doomed city…

First we choose what chooses us last;

the path is the only path.

A third variation (in which the translator says she “tried to do it justice by forcing a sort-of-form on a poem that exudes its classical-style beauty through its rejection of that form itself”) is Eva Kahan’s:

It seems, in dreams, my sandcastles give out –
I noted, fleeing far away, my day
Far from this city: castaway.

We set out;
Where we go, will find us –
We wind this route;
No other kind.

Hamid Ouyachi’s version is interesting for its bold, disorienting choices (including an Arabic gloss on one of the words used in the original):

Death is getting ready.

Zombies in the streets.

My dreams are made of sand,

out of this hell-hole.

You pick where you start

but the end picks you,

and there’s only one road.

Finally, there is Marco Franco’s Italian: 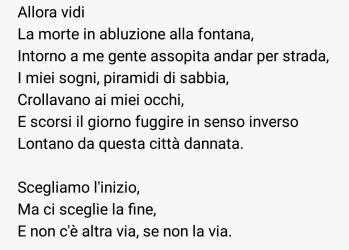 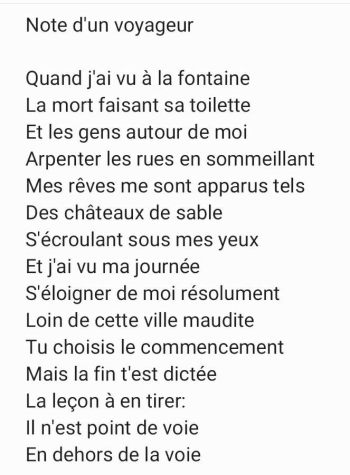 I’d like to end with Alexander Key’s powerful “Travel Note”:

Youssef Rakha is an Egyptian novelist, essayist and poet who writes in both Arabic and English. He is the founding editor of the bilingual literary website тнє ѕυℓтαη’ѕ ѕєαℓ: Cairo’s coolest cosmopolitan hotel, named after his acclaimed first novel, The Book of the Sultan’s Seal. He can be found on therakha.net, on Twitter @Sultans_Seal and on YouTube.

One thought on “‘No Way But The Way’”