Mahmoud Darwish (1941-2008) was the rare poet who could pack a stadium full of tens of thousands of fans while never being held captive by his readers’ expectations. Instead, he brought his readers along with him as he traveled to new poetic themes and forms:

Mahmoud Darwish has a large body of work that he was endlessly re-inventing such that, in the end, there is more than one Darwish. His poems range from anthems such as “Bitaqat Hawiyyah” to dense anti-narrative prose works such as Fi hadrat al-Ghiyab. If someone asked you “where should I begin?” what would you suggest? 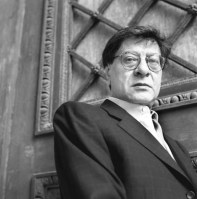 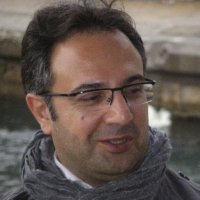 Mehmet Hakkı Suçin: There are several junctions in Mahmoud Darwish’s poetic adventure that continually reinvents itself. In the 1960s, his poetic philosophy influenced by classical Arab qasidah form and romantic poetry was replaced with a revolutionary and socialist one. The poem “Bitaqat Hawiyyah,” you mention, is a product of this era. When I first started to translate Mahmoud Darwish’s works into Turkish, Mahmoud Darwish was famous in Turkey virtually only with poems similar to it. However, the poet did not want to be known “only” with these poems. So, “where should I begin?” was actually a question I asked to myself as a translator. I focused on the works he had published during the last 20 years of his life. He had come up with a book for about every five years: Why Did You Leave the Horse Alone (1995), Mural (2000), Like Almond Blossoms and Beyond (2005), I Don’t Want this Poem to End (2009). The common characteristic of these works was that they were autobiographic. But this autobiography does not consist only of the story of his life. It is also about the story of the Middle Eastern geography, with an emphasis on Palestine, its history, of place and time, and of existence, of body and soul. Therefore, I cannot make clear-cut suggestions for the readers, but give flexible advice. Those who want to read poems in which a prose-like poetic language is employed with tones of daily language can start with Like Almond Blossoms and Beyond and proceed with any of the poet’s other books. Those who are keen on autobiographic works may begin with Why Did You Leave the Horse Alone and move on to other books.

In several of Darwish’s collections, including Why You Left the Horse Alone he is telling his own story, but also a collective Palestinian history. But not only Palestinian; he talks about telling a “Canaanite, Hebraic, Greek, Roman, Persian, Egyptian, Arab, Ottoman, English, and French” history in a way that is epic and mythic, and also quotidian. Does the Turkish reader find themselves in this history, in this story, in a way that is different from the Arab reader, the French one, the English?

MHS: As a matter of fact, we can hardly talk about a uniform reader. Even the same reader may have different perceptions about the same text at different times; so it is futile to make references to categorical Arab, French, or British readers. Every reader will perceive these texts to the extent of his/her culture, experience and creativity in reading poems. On the other hand, I do not deny the fact that every reader has as an individual a cultural history and his/her heritage may influence the way s/he reads Darwish’s texts. For instance, the Palestinian society is more familiar with references to Christianity than the Turkish society. Therefore, Darwish’s intertextual references may result in richer associations in the mind of a Palestinian reader. But this may not apply to an individual from another culture. So while translating Darwish’s works, I brought the references to verses from the Bible or the Torah to the attention of Turkish readers.

Darwish has spoken about how he begins with tempo, or rhythm, and that he needed an idea, image, or event to find its musical cadence. How do you go about re-building the poems in Turkish? Do you also search for the rhythm of them, the musicality?

MHS: In his poems, Mahmoud Darwish makes use of the entire sound and rhythm inventory of Arabic. He employs the taf’ilah meter in an extremely flexible manner. He may use several meters smartly in the same poem. This taf’ilah diversity in his poems prevents the poetic rhythm from becoming monotonous. Intertwined rhymes, alliterations, repetitions, and puns further help to enhance the poem’s rhythm. So it is not easy to re-create this poetry characterized with the richness both of sound and meaning in the target language with the same wealth.

In Like Almond Blossoms and Beyond, Mahmoud Darwish comes up with rhythmic poems close to prose. He even quotes Abu Hayyan at-Tawhidi at the beginning of his book as follows: “The most beautiful word is the one characterized as an image between the prose-like verse and verse-like prose…” As his poetry draws closer to prose, the influence of daily life can be felt with greater intensity. Therefore, your translation approach will change from one book to another and even from one poem to another.

Personally, before proceeding to translate a poem by Darwish, I first analyze it in terms of form. I try to estimate how I can compensate for potential losses in translation. I take down notes as I read it. Then, if Mahmoud Darwish had previously recited it, I listen to his recital. In this way, I try to make sense of the poet’s voice in the poem. I proceed with the translation after these stages. I make my best not only to transfer the content into Turkish, but also to re-create the original rhythm and musicality of the poem. Late Abdulkadir Abdalli, who had translated some 80 works of Turkish literature into Arabic, would say, “When I read your Turkish translations, I feel like I am reading Mahmoud Darwish in Arabic.” As I know he was not fond of complimenting, his observation would make me feel glad. I think the interest in these translations confirms his observation.

If you were to put the books you have translated by Darwish — all among his later poetic works — in conversation with other books from other languages (as if they could be guests at a dinner party, talking with other literary works), what would these be?

MHS: I would like to see how Mahmoud Darwish’s works would converse with the works of Nâzım Hikmet and Yehuda Amichai. I guess this would result in very interesting dialogues.