The smoky, loud, vibrant, traffic-clogged ten-story collection The Book of Cairo, ed. Raph Cormack, was published last month in the UK and next week in the US: 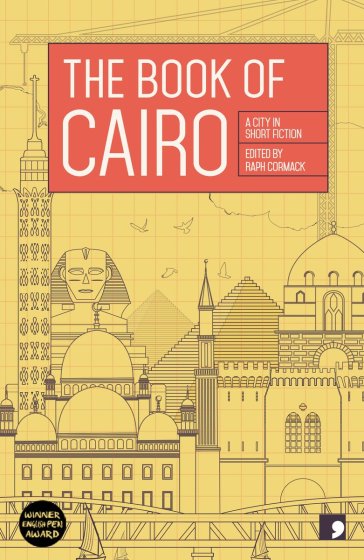 The collection follows the blueprint of The Book of Khartoum, ed. Cormack and Max Schmookler, and The Book of Gaza, ed. Atef Abu Saif; yet while the other two give more of an overview of city-stories, The Book of Cairo is very much a young, post-2013 book.

When you started the project, did you already have some stories in mind?

Raph Cormack: I didn’t have any stories in mind when we started this project in 2017. There were a few authors that I knew I wanted to look at (Ahmed Naji’s collection had recently come out for instance and I was interested to read that) but I was essentially starting with a blank contents page.

Then where did you look for the rest of the stories? Where do you think are the best places to look if a person’s searching for Egyptian (and in this case Cairene) literary short stories?

RC: I asked around a lot of people and got some very useful suggestions but my main method was to go around all the downtown bookshops and publishers that I knew and buy all of the recently published short-story collections. I then sat in Cairo reading until something grabbed me. In the end, almost all the stories came from the trifecta of Ain, Merit, and Kotob Khan (with one from Dar al-Misriyya al-Lubnaniyya and one from a publisher called Misr al-Arabiyya). It was an extremely pleasant way to spent a few months, just reading short story collections.

How many collections / stories do you estimate that you read through? What did you learn from the stories you didn’t choose about what’s going on broadly with the Cairene literary scene? Or what marks “The Cairo Short Story” of the 2010s?

RC: I reckon I looked at around 40 or 50 collections of short stories so the selection process was necessarily quite impressionistic. I would generally get a sense of whether I wanted to keep reading a story after a few pages and, if not, I would move on. The restriction of a Cairo setting obviously disqualified a lot of stories on first sight: nothing set abroad, nothing set in the countryside. There was a very nice story by Mohammed Abd al-Nabi that I would have loved to put in but it was set in Alexandria. There was also a condition that the stories had not been translated into English before so that disqualified a few more (including some good ones by Mansoura Ez-Eldin and Mohammed Aladdin).

There is a genre of short story that is quite prevalent (not only in Egypt) but is not to my taste; it can basically be summed up as “someone walking around and having deep thoughts.” Those did not go in. Nor, in fact, did anything about the revolution 2011-2013. I didn’t start with the idea of doing a kind of “post-Arab Spring Cairo” book but I felt it made more sense of the stories to frame it in this way. Also, I don’t think I found any Revolution-based short stories that I really liked. It might take a few years yet before people really figure out how to turn that period into a great short story.

I’m not sure I could really provide a satisfying answer to key question of what the “Cairo Short Story of the 2010s” is. In a way, I have tried to answer it in this book, but there are probably as many answers as there are people.

As you read & re-read the stories, what features stood out to you (the way bus travel stands out in Book of Khartoum)?

RC: The main threads that, in my opinion, run through all these stories are confusion, distrust of the people and reality around you, and the fragility of truth. It is there in almost all the stories from the rumor monger in “Talk,” to the narrator in “Into the Emptiness,” and the relationship that suddenly and for no apparent reason ends in “The Other Balcony.” There is a sense that we cannot believe other people or even ourselves. This is not a thread I went into the editing looking for, but it really emerged out of the material. In that way, I think these stories are very reflective of the 2010s both in Cairo (of course) and, perhaps, around the world.

That is one thing that stands out, but every reader will bring their own interpretation to these stories. It took me a few years (and conversations with a friend) to realise quite how much violence infused the stories in the Book of Khartoum, for instance.

How was this different from putting together Book of Khartoum in how you went about finding stories, working with authors and their publishers?

RC: The publishing scene in Egypt is obviously much bigger than in Sudan so looking for stories is a different game (also the time span of the Book of Khartoum was much longer so we could include some obvious classics which had not been translated into English yet). I want to repeat how important the taste of Egyptian publishers was in the selection of the stories (for the better, I hope, though it is in some respects a limitation). Publishing houses in Egypt are having a very hard time at the moment (for both financial and political reasons) so their commitment to keep producing so many books is truly admirable.

If there is one thing that I regret it is that I was not able to find many stories that gave an outsider’s view of the city. I remember hearing, for instance, about a novel set in the Syrian refugee areas in 6th October. I would have liked to find a short story like that but did not. If someone reading this is about to tell me they published a short story just like that in 2016, I apologize.

Did you have any particular aesthetic or other criteria in mind as you were reading through stories? Outside of stories by younger authors, and all but one post-2013?

RC: Other than my personal aversions detailed above, I tried to be as broad as possible. I like funny stories and since this is a book about Cairo, where a sense of humour is so important, I felt justified in putting a few of those in. I was very happy to include some of Eman Abd al-Rahim’s surrealism. I felt it was important to put in a romantic story, since so many are written but they are often not taken serious, so I choose Nahla Karam’s “The Other Balcony,” which I think is an extremely sophisticated love story. I really liked that she could do so much with such a simple, well-known scenario. It was nice to end the book on a touch of melancholy with Areej Gamal’s poetic little story “Alternative Guide to Getting Lost.”

Was there any sort of magic to matching the translator to the story? Has your practice changed, at all, in editing translations? How do you see the role of the editor in bringing out the best translation?

RC: If there was any magic matching translators to stories, it was mostly luck. Though, it helps that we had a great line up of translators and the stories all came out great. When I comes to editing, which Ra Page at Comma also did a lot of in this book so I can’t speak for it all, I like to try to maintain a sense of different translation styles as much as possible. After all, what’s the point of having ten different translators if you can’t tell the difference? However, I am getting more willing to mess around with the literal sense of each word to ease the whole text’s movement into English. But that is an endless debate of translation.

The editing of this collection raised an extremely interesting issue, one which I do not have a fully thought out answer to but which I would like to hear other people’s thoughts on. When we were thinking about assigning translations at the beginning I found that I had, more or less subconsciously, given women’s writing to female translators and men’s writing to male translators. There are good arguments in favour of doing this, I am sure, but it seemed a little uncomfortable to me so I made a few changes. In the end I am very happy with how everything came out, but I don’t know if I have come up with a well formed opinion on these questions of gender and translation.

What sort of short-story collection would you like to put together in the future, with infinite resources and time at your back?

RC: Other than adding more books to Nile city series (Book of Alexandria, Book of Juba) I would love to try to put together a collection of early Arabic short stories from the 1910s, 1920s and 1930s. It would take a lot of work trawling newspapers and old short story collection, and I can’t see it being a commercial blockbuster, but it would be a lot of fun.

On that note, more from Cormack: