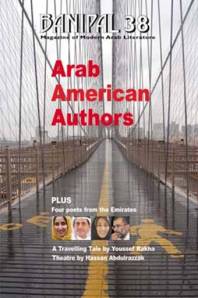 Publisher Margaret Obank, in her introduction to Banipal 38, writes that, “It’s also no coincidence that the Radius of Arab American Writers (RAWI) conference discussed the genre of memoir as an Arab American cultural art form, a form as crucial as grandmothers’ stories to later generations—we include excerpts from three memoirs-in-progress.”

Memoir is certainly a wildly popular genre in North America, and Gregory Orfalea’s recent Angeleno Days has made its mark in that category. (His offering to Banipal 38, however, was fiction.)

I don’t know enough about memoir to list works that outline a particularly Arab American art form, so I will take RAWI’s word for it. (Yes, Moustafa Bayoumi’s How Does it Feel to Be a Problem is getting heard, although with somewhat ugly fallout.)

But the three memoirs-in-progress in Banipal 38 (as weighed against the five novels-in-progress, a short story, and numerous poems) don’t show evidence of a genre that’s defining Arab American writers.

The three memoir fragments are:

The Water Cycle, Elmaz Abinader
Evelyn Shakir, At Home and Away
D.H. Melhem, Lights in a Doorway

Perhaps it’s that I’m simply not the ideal reader for memoir. There have, of course, been memoirs that I enjoyed: Khaled al-Berry’s Life is More Beautiful than Paradise springs immediately to mind; and, oh,Mourid Barghouti’s brilliant I Saw Ramallah and I Was Born Here, I Was Born There. Leila Ahmed’s A Border Passage. Does Darwish’s An Ordinary Grief count as memoir? In any case, I’m hard pressed to make a longer list. I would not be very hard-pressed with poetry or fiction.

I haven’t much negative to say about Elmaz Abinader’s The Water Cycle, except that it didn’t grab me nearly as much as the fiction or poetry that surrounded it. It had neither the plot draws of the fiction nor the intense word-love of the poetry. It provided an interesting family portrait, yes, and I did care about the characters, but not enough to remember them.

Evelyn Shakir’s At Home and Away was more fragmentary and more in love with words. It begins with the pithy observation that, “It’s my experience that Arabs and psychiatrists are natural enemies,” which sets one up to believe that at least some of what’s coming down the pike will be a bit madcap. At least, it sounds like a one-liner to me.

Instead, Shakir gives fragmentary views of her relatives, some of them quite lovely:

My Uncle Yusuf loved his suburban garden. He grew vegetables for his wife, and flowers for the joy of it. Flashy blooms—dahlias, giant chrysanthemums, and ruffled peonies, He cradled their heads in his huge hands. He cooed to them like a lover. Their enemies were his enemies.

Shakir weaves in a little history and a little identity politics. We hear a little about poetry, about religion, about her mother’s clothes-making business. Some of it is quite well-written, but when I hold the sum total of it in my hand, I am not sure exactly what I’m holding.

And D.H. Melhem is quite honest when she calls her reminiscences (thoughts about her Aunt Jerry and Thomas Paine) “a kind of memoir, in progress.”

Again, the three excerpts all had their merits, but I would stand them up neither against the fiction of Banipal 38, nor—and I’ll write about this soon—against its poetry. If memoir is the new Arab-American cultural art form, I don’t see the evidence here.

But I would be happy if you would give me the outlines of that genre: Suggestions on must-read Arab-American memoirs are welcome.