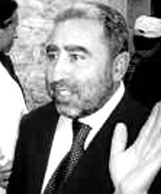 Mohammad Achaari, while known primarily as a poet, also writes fiction and administers culture. He was born in 1951 in Moulay Driss Zerhoun, Morocco.

Although he began his literary career, according to Banipal, with a short story, he followed it with six collections of poetry, as well as a short-story collection and two novels.

He has also been Morocco’s Minister of Culture (fellow longlister Bensalem Himmich is the current culture minister). Some of his works have been translated into French, Spanish, Russian, and Dutch. Eight of his poems were translated into English for Banipal issue 21.

He has been recognized on the 2011 longlist for his novel The Arch and the Butterfly. Organizers describe it as such:

Tackling the themes of Islamic extremism and terrorism from a new angle, The Arch and the Butterfly explores the effect of terrorism on family life. It tells the story of a left-wing father who one day receives a letter from Al-Qaeda informing him that his son, who he believes is studying in Paris, has died a martyr in Afghanistan. The novel looks at the impact of this shocking news on the life of its hero and consequently on his relationship with his wife.

A review from Dar al-Hayat

A poem (in Arabic) from the al-Babtain Prize website

His Role as Minister of Culture