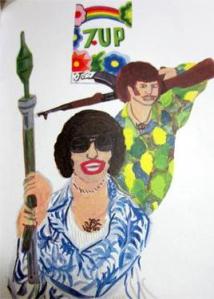 I received two graphic novels in the mail of late. One, Bye Bye Babylon, is a pop-art-infused look at Beirut’s civil war by Lebanese author-artist Lamia Ziade. The other, Habibi, is an Arabic calligraphy-inspired yarn set in a timeless “Oriental” world by American Midwesterner Craig Thompson.

Ziade’s work is informed by childish-looking pop-art of bright-colored Lebanese and Western products. She narrates her memoir through the lens of what items were being bought and sold in Lebanon in the late 1970s (Kellogg’s Sugar Smacks, Kalashnikovs, RPGs). Thompson’s images and text are both very different: They’re inspired by lush, sweeping Arabic calligraphy and told through the lens of Orientalist fantasy.

A quote borrowed from Nadim Damluji’s blog post,” Can the Subaltern Draw,” over at The Hooded Utilitarian: 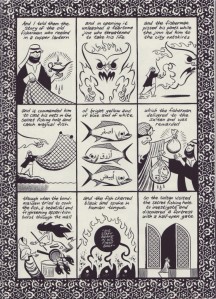 “Edward Said talks about Orientalism in very negative terms because it reflects the prejudices of the west towards the exotic east. But I was also having fun thinking of Orientalism as a genre like Cowboys and Indians is a genre – they’re not an accurate representation of the American west, they’re like a fairy tale genre.” – Craig Thompson, PopTones Interview, September 1, 2011

One could say that both Ziade and Thompson have appropriated a “foreign” art form, although it’s clear that while Ziade is quite familiar with the world of Western products, the world of the Qur’an and hadith remains foreign to Thompson, something he works hard to control. Although he intends to “play” with the Qur’an, Orientalist tropes, Arabic letters, and tales from A Thousand and One Nights, he is not fluent enough in any of these languages. When Mother Jones asked Thompson if he knew Arabic, he said he’d learned “just enough” to illustrate the book. Although his knowledge of calligraphy is surely more than enough, and its beauty lights up the book, the other “just enoughs” make Habibi largely more of the same cowboys and indians, enjoyable (or not) within the boundaries of its genre.

From my longer review of Bye Bye Babylon at Al Masry Al Youm:

Although Ziade’s words contrast the imported supermarket “paradise” with the violence that follows in Lebanon, the images of food and guns seem to bleed into one another. Libby’s bright-red ketchup looks different when side-by-side with a Kalashnikov. Kellogg’s Smacks (water pistol inside!) look eerily menacing when shoulder to shoulder with a Slavia.

Guns, grenades, and imported foodstuffs are on an equal footing here: All of them could be thrown in your cart at Spinney’s, rung up on a cash register, stuffed into a plastic bag, and brought home. Go on; keep reading.

And read more on Habibi at Nadim Damluji’s Can the Subaltern Draw?: The Spectre of Orientalism in Craig Thompson’s Habibi