‘The Iraqi Christ’: An Unsparing, Unforgiving Depiction of the Human Condition 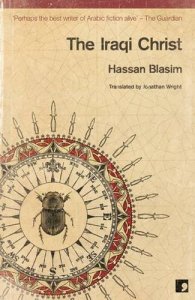 One of the inventions of Terry Pratchett’s ‘Discworld’ fantasy series was Klatchian coffee, a drink so high in caffeine that drinking it returns even the drunkest drunkard to a state of sobriety and “out the other side.”

Reading Hassan Blasim’s short stories can be a little like this. Their unsparing, unforgiving depiction of the human condition in its extremes of baseness and violence push beyond mere realism and enter a surreal world of deadpan depictions of the vile things that human beings are prepared to do to one another. A small boy apparently pushes his brother to death by drowning in a cesspit. A clairvoyant Iraqi Christian takes another man’s suicide belt in exchange for his elderly mother’s life. A Pakistani asylum seeker is conned by his fellow workers into putting his arm into a barrel of setting concrete so that they can rape him.

Even when relations between people do not degenerate into actual injury and death, they are almost entirely characterized by suspicion and hatred. Although Blasim is best-known for his depictions of the disintegration of Iraqi society, this includes life in the West, too — a bleak vision extending into both the past and future — as shown when a Baghdadi fleeing a masked gunman falls into a hole in the ground, encountering both an Abbasid inventor and a sci-fi girl fleeing a “blood analysis robot.”

But Blasim’s stories aren’t just violence-porn. First, the bitter view of human life they show is peppered with dark humor and observations. A women refers to her drunkard husband as “the arak gerbil,” while the two men she is looking after as they plan an attack on a government minister are freaked out when an egg mysteriously appears under their pet rabbit. The bizarre egg-laying rabbit remains a motif throughout the story, until it meets its own brutal end. In another tale, a draft dodger ends up hiding from the police in a pickle barrel — probably the one his one-legged father was hopping around in the previous scene.

Second, there are flashes of beauty which offer a way out of the grinding misery of everyday life in Blasim’s world. Given his jaundiced view of human beings, it is perhaps no accident that some of these come not from people, but animals. The canine narrator of “Dear Beto,” for instance, reminisces: “The first task I undertook there was to practice emptying out my mind and spreading its contents out in the sun to dry… How can I describe to you the taste of the light wind as it makes the leaves ripple like the flags of happy nations?”

Blasim’s vision of humanity is also repeatedly shot through with the notion that books, and the knowledge they contain, are a route for escape and redemption. In brief asides, characters are found reading Italo Calvino, Rumi, and Kafka. A terrorist-in-training “would sneak from our house to the roof and theirs to visit the library in the trunk… After that I fell in love with books about animals and plants.” Meanwhile his mentor uses the name ‘War and Peace’ as his Facebook handle, with an image of Tolstoy as his profile image. And a knife performer with supernatural skills becomes entranced with researching where his talents might have come from. He finds himself hoarding books from the renowned Al-Mutanabbi Street, the booksellers’ market of Baghdad which itself became the target of a huge bombing in 2007.

These are just a few of the themes and motifs running through Blasim’s work. It is possible to whistle through these stories, enjoying their dry wit, breakneck pace and wildly careening references as they veer from 1001 Nights to Real Madrid v Barcelona. Or one can work through them slowly, watching the brilliantly inconspicuous inward-foldings of historical, literary, political and personal patterns as they interweave. Whichever way one chooses, they should most certainly be read, not once but over and over.

Sarah Irving [http://www.sarahirving.co.uk] is author of a biography of Leila Khaled and of the Bradt Guide to Palestine, and has been a journalist and reviewer for over a decade. She is currently a postgraduate student at the University of Edinburgh and is dipping a tentative toe into the waters of Arabic-English translation.

2 thoughts on “‘The Iraqi Christ’: An Unsparing, Unforgiving Depiction of the Human Condition”