Saadi Youssef’s Language, ‘The Language Used By All’

I am still reading and re-reading Nostalgia, My Enemy, poems by Saadi Youssef, trans. Sinan Antoon and Peter Money. 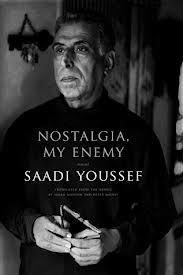 Youssef, one of the world’s great living poets, differs significantly from his fellow Arab poet Adonis, who has built grander and grander towers of words, reaching sometimes brilliantly and sometimes up beyond sight, into the sky.

Youssef’s poetry, on the other hand, seems to place its hands on the ground and wait for the reader’s step. From Youssef’s “Prologue: On Poetry”:

Poetry transforms in that intimate moment combining the current and the eternal in a wondrous embrace. The tool it uses is the most common, ordinary, and daily one in people’s lives. It can be found in the market and and on a child’s lips before ever being in a book. It is a simple, accessible, and democratic tool. It is the language used by all.

In Youssef’s hands — and then in Antoon’s and Money’s — the poems indeed evoke both the ordinary, but beyond that, our ability to see the ordinary (including ordinary evil, ordinary poverty, and ordinary death) afresh.

From “Still Life,” which begins with the ordinary but from a step back: “The houseplant bends in the heavy air / on the table, / between a full ashtray and the tobacco pouch, / there are gas and electricity bills. / The ship sets sail on the wall, / the bird pecks at the singer’s head on a CD cover, / my room is sick of me!”

It ends beautifully, and perhaps a little mystically, but still in concrete, natural terms: “The ship has disappeared. / Night sits in the corner / covering itself with thick air.”

Antoon and Money discuss the collection here, in “How a poet writes about Iraq ‘disintegrating before his eyes,‘” and here, in “Ask the Poem.”

But I have not (yet) included many things, including this anecdote from Antoon, which speaks to the warmth and openness I find in Youssef:

In 2009 at the Casablanca Book Fair, there was a special session to celebrate Saadi’s work. We were there to film him in an Arab setting since we cannot film in Iraq. He was signing the 7th volume of his Diwan at al-Jamal’s booth. A group of young school girls approached and one of them wanted him to sign his book. As he was writing her name down, one of her friends told Saadi: She’s a poet. Saadi was enthusiastic: Ahh! The young girl was timid and said “I’m just a beginner.” He told her “We are all beginners.”

Your Middle East: How a poet writes about Iraq “disintegrating before his eyes”