I returned from travels yesterday to find a copy of Lila Abu-Lughod’s new book, Do Muslim Women Need Saving? The ideas Abu-Lughod raises, at least in the sections I have read thus far, dovetail with Adam Talib’s musings in “Translating for Bigots“: 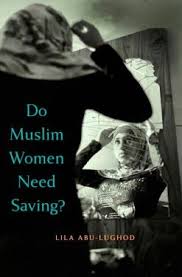 The literature on which Abu-Lughod focuses is not “translation” or “fiction” on its face — it is usually written in English, often by a ghostwriter, journalist, or co-writer, and labeled nonfiction or memoir. These are, unlike Arabic literature (in translation), positioned as “true” stories, unmediated.

Also unlike Arabic literature in translation, this genre, Abu-Lughod writes, is “published by trade presses, reviewed widely, and adopted by book clubs and women’s reading groups, a lurid genre of writing on abused women — mostly Muslim — [which] exploded onto the scene in the 1990s and took off after 9/11.”

There is a particular formula to these “memoirs” (some of which have been exposed as frauds); in Abu-Lughod’s view, they are characterized by themes of “coercion and lack of consent, absence of choice, and unfreedom.” They are stories of honor killings, forced marriages, abductions, and forced labors. Abu-Lughod does not doubt that many of these stories have at least some basis in real, lived lives. However, these “radically specific” stories are generally given no context, made to stand in for entire communities and cultures. They are also radically different: These stories are not told to help us better understand our own foibles, but to see ourselves in a completely different place from these “other” women.

This genre, which Abu-Lughod calls “literary trafficking,” is surprisingly and persistently best-selling, circulating copies in the millions.

This genre doesn’t concern us here except that it in many ways overshadows, and shapes the reception of, Arabic literature (in translation). Its popularity alone is important. A quick search of random US public libraries will turn up far more Nonie Darwish than Mahmoud. The reason for the popularity is also important — these stories feed a particular hunger among French- and English-language reading publics, and some readers will also be looking to sate this hunger through fiction.

But, most of all, by labeling this genre “nonfiction,” it sets readers’ expectations for what sorts of Arab and Muslim stories can be authentic. If these stories represent “real” women’s lives, then what Radwa Ashour writes in Spectres — or the life of Milia in Elias Khoury’s As Though She Were Sleeping — must be something else entirely.

Insha’allah the title alone of Abu-Lughod’s book will strike a chord and will make some English-language readers re-think, even just slightly, what sorts of Arab and Muslim women’s narratives they seek out and validate. The book’s cover alone is an wonderfully humble and ordinary portrait. Does the woman on this book’s cover need saving? Instead of being radically different, the woman on the cover is very much the same as American women picking up the book. She’s rearranging her clothing before leaving for work or school or an engagement with friends — who doesn’t do that?

I look forward to reading the rest of the book.