The Muscat International Book Fair in Oman, which closes tomday and has in the past seen 800,000-some visitors, saw an infrastructural push this year. Meanwhile, the giant Riyadh Book Fair — which sees between one and two million visitors — opened on March 5:

Because of distribution problems between Arab countries, and the lack of strong bookstores in some countries, book fairs have continued to occupy an important place in the Arabic publishing ecosystem. Publishers lug their books from fair to fair, and hungry readers can come see what’s available.

Bigger bookstores and digital publishing are changing some of this. But book fairs, particularly in the Gulf, remain a important place for sharing titles and meeting authors. This year’s Muscat fair, which opened on Feb. 26, boasted 160,000 titles brought in by the 570 publishers, as well as a number of literary events. The fair also had a website this year where organizers blogged in English and in Arabic.

Officially — and this is a change from previous years — there was to be no censorship at this year’s Muscat fair. Before the fair, Oman’s Minister of Information Dr Abdul Mun’em bin Mansour Al Hasani announced: “In view of an open and free environment, no book was banned and no title was seized.” (At least, such was the case before the fair began.)

Although sales data wasn’t available, anecdotally, publishers told reporters that there was high demand for “bestsellers,” translated literature, and “books on housemaids.” There were fewer foreign publishers than there might have been, in part because of the fair’s higher infrastructure costs and because the behemoth Riyadh Book Fair started mid-way through the Muscat fair.

The larger Riyadh book fair boasts some 900 publishers from more than 20 countries.

It’s unclear how many books are and aren’t available at the Riyadh fair, but the banning of some books was announced before the opening ceremony. As Muftah reported:

According to the President of the Saudi Publishers Association, Ahmad Al-Himdan, books written by The Muslim Brotherhood and other extremist groups will not be sold at the fair because of their threat to ‘intellectual security’.” Abdel-Aziz Al-Okail, Saudi Deputy Information Minister has also said that “whatever violates the religious and political principles of the Kingdom is considered banned, whether it belongs to a country or a party.”

Still, a few cultural events and a large number of books were available: 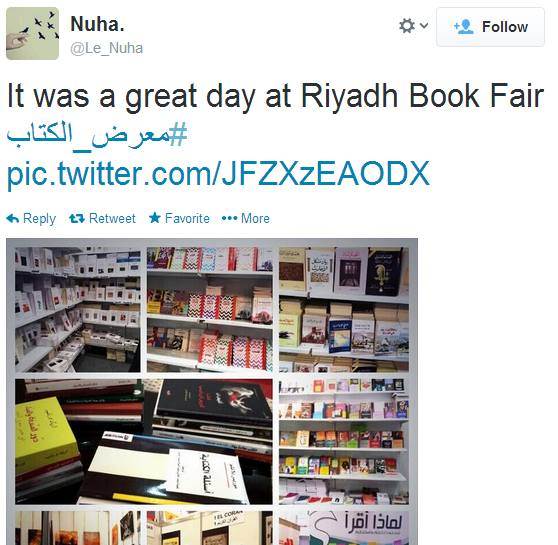 And @OmarAloqaili noted that the fair had made considerable progress since 2006: 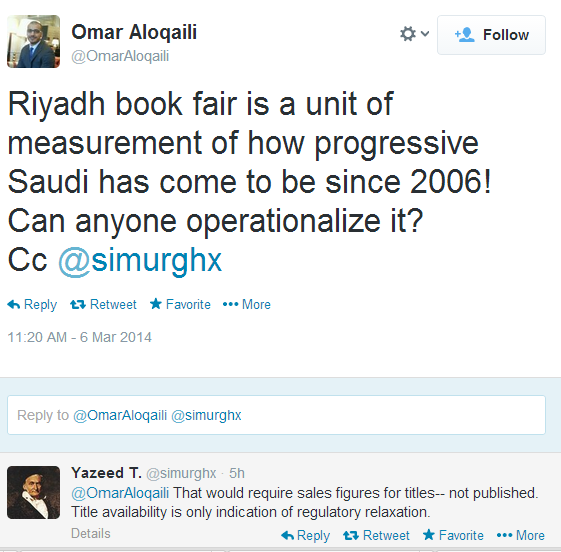 The Frankfurt Book Fair’s Cornelia Helle — who is at the Riyadh Fair — shared some of her photos.

Husam Karam of Dar Al Kausar of Syria who also displayed 35 Arabic translation of Agatha Christie and 20 titles of William Shakespeare, said that Omanis along with other Arab readers do not want to lag behind in being acquainted with the international titles. This is the reason that the demand for translated books is growing.

Times of Oman: Books on housemaids fly off the shelves at Muscat International Book Fair

Ahmad Al Raisi, who was attending to the Dar Al Saqi book stall at the fair said that these two books [Diary of a Maid in the Gulf and I am Kumari from Sri Lanka] have attracted a lot of interest from the general readers, who, for the first time, can get to know the detailed account of the lives of the maids in the region. Lots of copies of these two books have already flied off the shelves in the very first week.

Ahead of the inauguration, the head of the Saudi Publishers Union, Ahmed al-Hamdan, had announced that any books “relating to the Muslim Brotherhood group, it’s ideas or thinkers” would be banned from the fair, citing security reasons.

In reaction to Al-Rashidi’s allegations, the Saudi embassy in Oman claims there is no ban on Al-Istibdad attributing the inability to accommodate all vying applicants to space constraints that give priority to major publishing houses.