A global list of events that feature Arab or Arabic literature in some sort of translation. Please email with events or add them below: 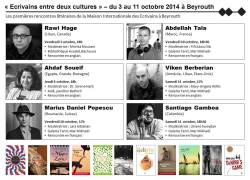 I know, I can’t quite picture it, either. But if you liked the novel — plus, this is definitely a sort of translation. More here.

A free event with international food, poetry, and film, at the Scottish Storytelling Centre. More here.

The acclaimed, fantastic Palestinian novelist and short-story writer Adania Shibli will appear at Ferrara’s Festival di Internazionale along with Teju Cole and Peter Froburg. (I might have to fly to Ferrara.) More here.

“A ray of light… between two nights.” A poetry reading by Ibrahim Nasrallah in Arabic, English, and French (Quebec, Canada)

Comedian and Author Amer Zahr with a Panel at Iroquois Library (Louisville, USA)

Amer Zahr is an Arab-American stand-up comedian, author, and filmmaker who will appear on a panel at the Iroquois Library in Louisville, Kentucky. More here.

As part of the Center for Translation Studies series at the AUC’s Tahrir Campus, Oriental Hall. More here.

The Death of Arabic is Greatly Exaggerated: A Talk with Elias Muhanna (Providence, United States)

“Notes on the Future of a World Language,” by the blogger Qifa Nabki. More here.

The Egyptian-British author speaks about writing between two languages and cultures. More here. NOTE: This event has been cancelled.

The Moroccan-French author speaks about writing between two languages and cultures. More here.

The novelist will also receive a prize for her novel The Dove’s Necklace, forthcoming in English 2015. More here.

The novelist will speak about his latest novel at the Natalia Ginzburg Public Library . More here.

Join poets Deema Shehabi, Lawrence Joseph and Sinan Antoon, plus poet and translator Marilyn Hacker and the Cathedral’s Poet in Residence Marilyn Nelson, for an evening of contemporary poetry from the Middle Eastern diaspora. More here.

The novelist will speak about his latest novel at laFeltrinelli Librerie. More here.

The novelist will speak about his latest novel at laFeltrinelli Libri e Musica . More here.

Readings from A Bird is Not a Stone (Edinburgh, Scotland)

A Bird is not a Stone is an anthology of contemporary Palestinian poetry translated by Scottish poets. Join hosts for readings from the anthology by Edinburgh Makar Christine De Luca and Abla Oudeh, who will read the original Arabic. Discussion afterwards with co-editor Sarah Irving. More here.

The first literary event is on October 22 at Kensington Central Library. More here.

The AUC Press will be holding its upcoming “Book Alley” meeting to discuss Hala El Badry’s latest novel Rain Over Baghdad. Readers will have a chance to chat with the author. The meeting will be in AUC Tahrir Bookstore on Wednesday, Oct. 22, 2014, beginning at 7 p.m. Refreshments will be served.

“Banipal and the Arab British Centre invite you to an unmissable evening at this unique literary resource in the heart of London, our lending library of over 600 works by contemporary Arab authors in English translation or written originally in English.” More here.