The Festival d’Angoulême — the third-largest comics festival in the world — today announced its roster of prizes, including the prestigious “best album” prize: 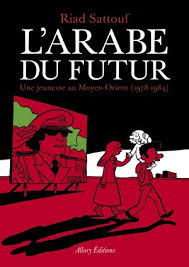 The prizes went to a diverse list of artists, including Chris Ware (for Building Stories), the blogger behind blickaboo.blogspot.fr, and Zhang Leping of the San Mao comics. At the top of the list, winning “best album,” was Syrian-French artist Riad Sattouf for his latest work, L’Arabe du futur: une jeunesse au Moyen-Orient (1978-1984), which is scheduled for a release in English in May.

According to English-language publisher Metropolitan Books:

The Arab of the Future, the #1 French best­seller, tells the  unforgettable story of Riad Sattouf’s childhood, spent in the shadows of 3 dictators — Muammar Gaddafi, Hafez al­Assad, and his father.

In striking, virtuoso graphic style that captures both the immediacy of childhood and the fervor of political idealism, Riad Sattouf recounts his nomadic childhood growing up in rural France, Gaddafi’s Libya, and Assad’s Syria­­but always under the roof of his father, a Syrian Pan­Arabist who drags his family along in his pursuit of grandiose dreams for the Arab nation.

The festival also awarded special honors to Charlie Hebdo and launched a new freedom of expression prize. There was extra security at this year’s festival, and New York Times reported a more somber attitude.

‘The Arab of the Future’: Best-selling Graphic Novel Coming to English