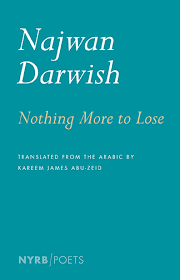 The poetry list was announced first, at 10 a.m. EST, and it featured seventeen titles, including one from the Arabic: Najwan Darwish’s Nothing More to Lose, translated by Kareem James Abu-Zeid. The BTBA thus becomes the first translation prize of 2015 to acknowledge the rich stream of Arabic poetry in translation from 2014, which included Fady Joudah’s marvelous version of Amjad Nasser’s Petra and several others.

The BTBA poetry prize — like the 2015 PEN poetry in translation prize  — also longlisted Where Are the Trees Going? by Lebanese poet Venus Khoury-Ghata, translated from the French by Marilyn Hacker.

There were several other BTBA-longlisted titles that overlapped with the PEN’s ten-title poetry longlist, including Guantanamo by Frank Smith, translated from the French by Vanessa Place.

The twenty-five-title fiction list was announced an hour later, at 11 a.m. EST. Although there was a good deal of overlap with the UK-based International Foreign Fiction Prize (IFFP) and the US-based PEN translation prize for prose, the BTBA had the most Spanish-language heavy list. The 2015 IFFP longlist was, meanwhile, German-heavy.

None of English’s three big translation prizes — IFFP, PEN, or BTBA — selected any books translated from Arabic for their 2015 prose longlists.