‘The Drone Eats With Me’: A Vivid Chronicle of War’s New Face

From Qantara, a review of the Comma Press edition of Atef Abu Saif’s The Drone Eats With Me: 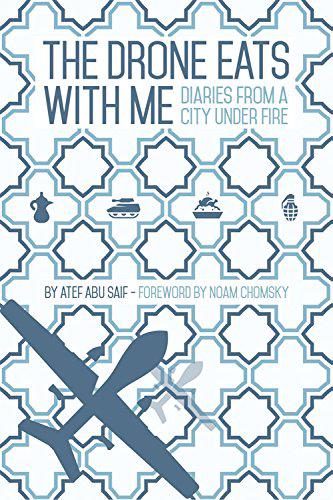 War is among literature’s most constant companions. Violent conflict has shaped and shaded the epic poetics of Homer and Antarah, the dark memoirs of WWII death camps and the recursive novels of Lebanon’s civil war. Each new face of war has inspired, or perhaps demanded, a new sort of literary engagement. War’s newest face – impersonal drone attacks –is a tale still undertold, particularly from the non-combatant’s perspective. But civilian life during drone war has found a great new literary chronicler in Gazan novelist Atef Abu Saif.

Abu Saif’s “The Drone Eats with Me: Diaries from a City Under Fire” tells the story of invasion from the point of view of a non-combatant. In it, we hear less about soldiers and tactics than we do about the faceless metal warriors whirring overhead. This is the story of an invasion that is low-contact, low-casualty for the invader and high-contact, high-casualty for the invaded – the story of “anti-terrorist” warfare. In particular, this is war in the Gaza Strip in the summer of 2014.

“The Drone Eats with Me” is structured diary-style, from the beginning of the war to its end, although both are unstable moments. As the narrative opens, we are unsure if war is beginning, will begin, or has already begun. Throughout, we are equally unsure if war is ending, and how we might recognise this “ending” when it comes. Abu Saif’s older children are constantly asking if the war is over. Even Abu Saif’s emphatic declaration of survival after a treaty is signed is overshadowed by the afterword, which admits that “the war goes on”.

Just as this is not a war without distinct edges, Abu Saif doesn’t give us a bird’s-eye view of the conflict’s competing parties. We hear nothing about Hamas or Fatah, Labour or Likud. Although Abu Saif is a compelling political thinker with a doctorate in political science, in “The Drone Eats with Me” he wipes out political labels and specificities. Nearly all of the politicians are nameless, and Palestinian militiamen appear without party or allegiance. People shout slogans, but we don’t know their content. We are held absolutely to what it’s like to live through this war. We know little about what started it, or what happens outside its confines. Keep reading at Qantara.