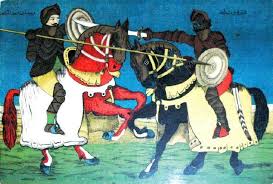 The introduction, by Eliza Griswold, opens:

Since Odysseus paddled home to Ithaca, most of the world’s great war stories have belonged to men. Men have written them and men have starred in them, because, for the most part, male soldiers have occupied the frontlines from Sparta to Verdun. In addition, men’s voices have been the dominant voices elsewhere in literature, why not in war?

This may have been the case with many of the classic war epics, where the literate among men left their homes and traveled to fight battles, while literate women were more likely to write on domestic and religious themes. But growing literacy has long since met more rapacious wars; Lebanon’s civil war, for instance, has been a topic for almost any author who found themselves inside the country between 1975-1990.

Is there a difference between men’s and women’s war stories? The Arabic short story in WWB’s April issue, “Mass Grave,” was written by US-based Iraqi author Faleeha Hassan and translated by William Hutchins. It is told from the point of view of a male soldier, and its interests are indistinguishable from those of a male writer. It is somewhat distant from its material, lacking the immediate punch of a short story by Hassan Blasim or Mahmoud Saeed, but nonetheless focused squarely on a moment of (male) war.

But other Iraqi women writers do focus on excavating women’s lives during conflic: Duna Ghali’s recent Orbits of Loneliness, for instance, describes the narrator’s relationship to her young child both before and after the US invasion and occupation. Hadiya Hussein’s Beyond Love, about those living in an emotional no-man’s land after fleeing war.

Certainly, the interest in women’s lives isn’t just the province of women — Iraqi writer Ali Bader consciously focuses on women’s lives during war in his 2015 novel Kaafira, or The Godless Woman. But here, by women:

There are dozens of women’s novels set in and around Lebanon’s 15-year civil war: Hanan al-Shaykh’s classic The Story of Zahra; Najwa Barakat Oh Salaam! which explores how people go on (or don’t go on) with their lives after war; Alexandra Chrieteh’s anti-identitarian Ali and His Russian Grandmother; Etel Adnan’s passionate, feminist Sitt Marie Rose; Zeina Abirached’s graphic novel for young readers, A Game for Swallows; Fatima Sharafeddine’s striking picture book There is War in My City.

But Lebanese novelist Hoda Barakat nonetheless stands out as one of the great authors of the war. She’s not interested, as she says, in “men who make history and the characters who believe in something.” She’s interested in the details of life during conflict, in digging underground, in seeing the traces of life left behind by humans.

Barakat generally focuses most of her attention on male characters, and her writing has even been called “anti-feminist.” But although it doesn’t focus on women’s lives, The Stone of Laughter, which centers on a gay protagonist, challenges the rigidities of gender construction in a fresh, unburdened way.

Syria, today: Rasha Abbas, The Gist of It

There are many women’s books about war in contemporary Syria, including two nonfiction books by Samar Yazbek that are available in English translation by Max Weiss (Woman in the Crossfire) and Nashwa Gowanlock and Ruth Ahmedzai Kemp (The Crossing). But the stories of Rasha Abbas’s The Gist of It collection eschew the narrative realism that Yazbek and a number of others use. Abbas’s stories fall apart, explode, turn themselves inside out, howl, and force the language in new directions in order to echo young people’s lives in the ripping, broken, wailing war.

From “Falling Down Politely,” which ran in Words Without Borders, trans. Alice Guthrie:

You open your curtains to find a severed head in an elegant planter on the windowsill. It’s bald, and the eyes are peacefully closed. As far as you remember you’ve made no visit to al-Muʿtamid ibn Abbad’s medieval garden of severed heads to pluck this one from among his enemies, so perhaps the early-onset Alzheimer’s promised by your mother’s genes is setting in already. Or maybe al-Muʿtamid himself arrived in Damascus last night bearing these heads of his as gifts borne along—as you saw in a waking dream last night—in a convoy darkened by the shadow of a thousand curved swords, which blocked the way through the Bab Sharqi old city gate. You sat down on a wooden chair there once, right on the curbside, worn out from a show-off drinking binge that hadn’t made you look hard like it was meant to; a German tourist dabbed at your brow with a damp piece of cloth, saying “You’ll be all right,” in a scornful Germanic English voice. Then you got into a taxi with your broke friends and terrified them— you were so out of it that you actually launched into a mangled recitation of an Old Testament psalm in broken Hebrew (you had just about learned the basics of it) as the taxi driver stared distrustfully at you in the rearview mirror. “Give thanks to the Lord!” you said to him in Arabic, as if in response to his glares, then completed the line in your dodgy Hebrew “keiy . . . leiawlaam . . . khasdu” (“for his steadfast love endures forever”).

This novel, trans. Aida Bamia, is remarkable not just for the attention it shows a multiethnic Palestine just before war descends, but because of its interest in individual women’s lives thatwere largely not recorded by history but who certainly participated in “history-making” events.

It’s similar to Elias Khoury’s seminal As Though She Were Sleeping, yet Khalifeh is less interested in great shifts, and more interested in the rough individual lives of women. Of Noble Origins is unusual in that it treats the lives of Palestinian Christians, Palestinian Muslims, Jewish immigrants, and British colonial leadership with an equal narrative interest.

Djebar uses the voices of the French colonial officers and soldiers as they invade her country, standing them counterpoint against the stories of a girl growing up in the coastal town of Cherchel. Where only the masculine, invading force is available — only their stories of the 1830 invasion, for instance, have survived — Djebar uses them to tell her own story.