This week, ArabLit is officially on #teamngugi. Yet it does seem strange that the betting agency Ladbrokes insists, year after year, that the two representatives of  Arabic literature in the Nobel betting pool should be Adonis (6:1) and Nawal El Saadawi (50:1):

According to the memoir of pioneer translator Denys Johnson-Davies, Memories in Translation, the Syrian-French poet and critic Adonis was on the Nobel’s unofficial “Arabic” shortlist in 1988, along with Naguib Mahfouz (winner), Yusuf Idris (1927-1991), and Tayeb Salih (1929-2009).

Now, Johnson-Davies’ memories are unofficial: The only Arabophone author officially nominated for the Nobel — well, outside of Mahfouz — is Taha Hussein, first nominated in 1949.

There are others who could’ve been on the list: Pioneering playwright Saadallah Wannous (1941-1997); novelist and playwright Kateb Yacine (1929-1989), who wrote primarily in French, but also in Arabic and Tamazight; novelist Abdulrahman Munif (1933-2004).

In any case, Adonis was on the list in 1988 and has remained a Nobel talking-point ever since. The other Arabic-literature who’s joined the Ladbrokes regulars, remaining year after year, is Egyptian writer and activist Nawal El Saadawi. She is almost certainly remembered more for her politics than her literary craft.

Ladbrokes suggests they let the market determine the shortlist. However, their market seems to be a bit hung up on 1999.

This list below is not a collection of favorites — I’d love to shake up the list by throwing on younger authors (Iman Mersal!), literary translators (Humphrey Davies, why not?), and for goodness sakes graphic novelists. Instead, these are five writers who could credibly be put in the Nobel betting pool by Ladbrokes’ seeming criteria. Please do add others below. 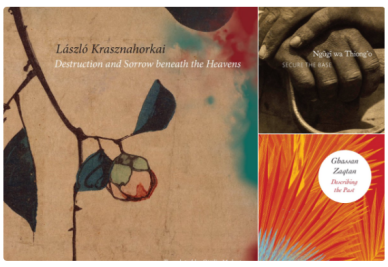 Ghassan Zaqtan. Two-time finalist for the Neustadt Prize, winner of the Griffin Poetry Prize, with translator Fady Joudah. Seagull Books puts their recent edition of Zaqtan’s Describing the Past (gorgeously translated by Samuel Wilder, who has not left a flat sentence) with books by Ladbrokes listees László Krasznahorkai (20:1) and Ngugi wa Thiong’o (4:1), while also mourning the fact that the great Mahasweta Devi never took the prize. Zaqtan’s name did appear in the Ladbrokes betting in 2013, but has not since. What’s he done? Zaqtan is primarily known as a poet, but it is his ghostly, prose-poetic Describing the Past — about how we can, must, and do describe the past — that is his most attention-getting work in English translation.

Hoda Barakat. Finalist’s list for the 2015 Man Booker International, the year it went to  László Krasznahorkai (20:1). She’s won the Naguib Mahfouz Medal for Literature, and in 2002, she became Chevalier de l’Ordre des Arts et des Lettres. She became the Chevalier de l’Ordre du Mérite National in 2008. What’s she done? Barakat has a slimmer ouvre than al-Koni or even Rabee Jaber, but she is a serious prose artist. As MBI judge Marina Warner noted of her novel The Tiller of Waters, for instance, it “is constructed around imagery of fabrics, which provide the cadences of the story. It’s a very poetic structure and an interwoven structure — it is a fabric in itself.”

Ibrahim al-Koni. Finalist’s list for the 2015 Man Booker International, the year it went to  László Krasznahorkai (20:1). Last year, William Hutchins took the National Translation Award for his version of al-Koni’s New Waw. I don’t think he has ever been on the Ladbrokes radar. What’s he done? Takes prose in a new direction, a fusion of Tuareg folklore, classical Arabic, and the Western novel. Judge Marina Warner called it “a whole world of experience and imagination,” and it is particularly rich in the human-animal and human-nature relationship. However, some of his literature is distinctly non-Western, and requires a different reading apparatus.

Sonallah Ibrahim. The Egyptian writer not only known for his language-shifting fiction, but his principled stand in taking the stage to refuse the Arab Novel Prize, saying the Mubarak regime did not have the credibility to grant it. He has not been a self-promoter, which is one reason you don’t find him in international lists, and has even let the English translation of his Zaat fall out of print. But run don’t walk to read his Stealth, translated by Hosam Aboul-ela. What’s he done? You can read some of it in his Notes from Prison, translated by Robyn Creswell; about the shift in his thinking, which in turn shifted Egyptian literature.

Elias Khoury. The Lebanese novelist was in the Ladbrokes betting as recently as 2013, but hasn’t appeared since. What’s he done? Khoury rips the skin off the relationships between personal and state violences, as in his terrifying Yalo, shortlisted (in Humphrey Davies’ translation) for the Independent Foreign Fiction Prize and the Best Translated Book Award; he looks at how violence and memory play out in a woman’s body, in As Though She Were Sleeping, and often returns, in circular motion, to the same themes (and characters) in novel after novel, such that his ouvre can be read as a single work. He’s also unapologetically interested in the human and civic rights of Palestinians.

Rabee Jaber. Almost certainly too young (he was born in 1972) and under-recognized in translation, Jaber is perhaps unparalleled in his seriousness and his reaching-out toward issues of identity, self-formation, and violence. What’s he doing? The author of nearly twenty novels, Jaber is scratching out questions and answers about who we are, where violence comes from, and how we might (or might not) find a different way. His Confessions, in beautiful translation by Kareem James Abu-Zeid, is a must-read.