Friday Finds: ‘The Man Who Hates Sneezing,’ a Story from Syria

M–DASH, a publication of Autumn Hill Books, has put up its “Winterfall” issue, which features work from Iran, Iraq, Syria, and Sudan and includes Alice Guthrie’s translation of a short story by Zaher Omareen: 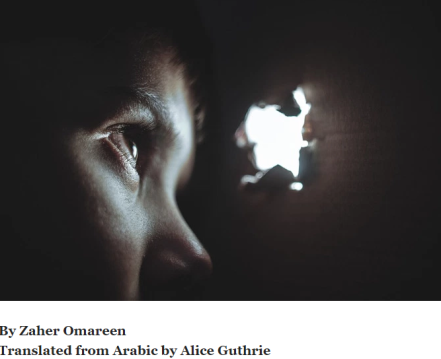 Omareen (@zaheromareen) is a PhD candidate in contemporary documentary cinema and new media at Goldsmiths College in London, and is currently at work on a short-story collection called Tales of the Orontes River, drawn from “the collective memories of the 1982 Hama massacre.” His work has previously been featured on Words Without Borders, and he was one of the editors of the multi-genre collection Syria Speaks.

From “The Man Who Hates Sneezing“:

––Why don’t you and Mom have any photos from your wedding, Dad?

––Because no one dared have a wedding in those days. This was at the height of the uprising in ’79. All you’d hear was “They killed so and so today,” and “They blew up such and such a place today,” and “They took so and so’s son away today,” and “Today so and so’s corpse was released to his family.” Anyone who held a wedding right then would’ve been spat at by the rest of the community. People were going to five or six funerals a day, every day. So, it really had to all be hush-hush: me and your mom got married on the quiet.

––What do you mean? How can you get married on the quiet?

––Me and your grandma, God rest her soul, went and picked your mom up from her parents’ place—in those days your Uncle Yahya had a taxi, one of those rounded-looking old Mercedes we used to call “doughnuts,” so he took us over there. And it was cool, actually, because when we got there and I pointed the house out to him—that was the first time he’d been there with me—he said “Hey, this is my buddy’s parents’ place!” So I said “What are you talking about? This is my fiancée’s place!” And he said “No way, don’t tell me you’re marrying a relative of one of my closest friends?!” You see how life was back then? No one told their friends, even their closest friends, that their sister was engaged or had gotten married—it was seen as very shameful, it would have been really frowned upon. And even today, actually, the father of the bride and her sisters aren’t supposed to attend the wedding—it is still all kept very private.