The final countdown to the 2017 International Prize for Arabic Fiction — popularly known as the “Arabic Booker” — has begun:

The prize is set to be announced this evening in Abu Dhabi, the night before the opening of the city’s international book fair.

Last night, five of the six shortlisted authors were hosted by NYU Abu Dhabi in a discussion moderated by AUB professor Bilal Orfali. Writer Rana Asfour tweeted from the event, which Kuwaiti novelist Ismail Fahd Ismail (shortlisted for his Al-Sabiliat) was apparently unable to attend.

Snippets from the night include Binshatwan saying: “The Arab character is decaying and we are trying to save what’s left through writing. Writing is my escape as well.” According to Asfour, Binshatwan also said, “For my book I collected folkloric stories because formal history never mentioned slavery in Libya, actually marginalised it.”

Alwan, whose novel follows twelfth-century philosopher-poet Ibn Arabi, said, according to Asfour, “Writing on a real character was challenging yet I learnt as I wrote & it proved a joyous experience’.” 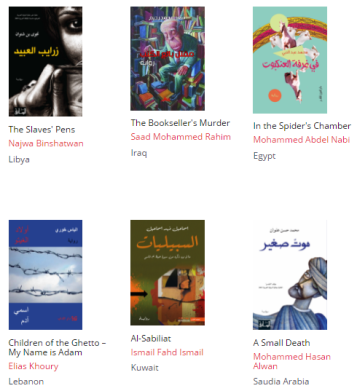 Abdel Nabi, who was apparently asked about whether his novel presents stereotypical gay characters, perhaps in response to an online review of his In the Spider’s Room, which is set around the Queen Boat arrests of many in Cairo’s gay community. Abdel Nabi apparently said: “Let’s not burden literature with more than it can take!”

Asfour clarified that she felt Abdel Nabi “avoided the question. He said that literature should not always be expected to carry the burden of reality.”

In respones to a question about why only one woman was on the shortlist, Khoury apparently said: “A personal observation is literature in [the] world[,] not only Arab world[,] has male domination.”

Khoury also reportedly added that the “‘trend now is 2 write about the present as if in revenge on authors who refused to break silence in the past.”

Interviews with all six of the shortlisted authors can be found on the International Prize for Arabic Fiction website, where they all gamely answer questions about where they were when they heard they’d been shortlisted (at the office; at home; recovering from surgery) and who influenced them (shortlisted novelist Saad Mohammed Raheem generously names fellow shortlistee Elias Khoury).

The National ran a short piece about each author’s chances, although without any fun numbers to gamble on.

Short translated excerpts of each of the novels can be read in the current issue of Banipal magazine, along with a discussion of whether literary prizes are a positive or a negative for Arabic letters. Over on Bookwitty, I discuss this discussion, and recommend 10 reads from the prize’s first 10 years.

As in other years, the six shortlisted finalists will receive $10,000, with an additional $50,000 going to the winner.

The IPAF does provide funding for English translation for its winners.

One thought on “Winner of 2017 International Prize for Arabic Fiction: Previews Before Today’s Announcement”