ArabLit’s Summer 2017 Recommendations and Where to Read Them: Beach? Bar? Darkened Closet?

Summer is a season for reading the new, enjoyable, and unexpected. And yet not all books are best enjoyed at a beach:

Some should be read at a party to which no one comes, on camelback in the Sahara Desert, or in the lobby of a therapist’s office. All of our eight summer recommended reads (which come with suggestions on where to read them) are recent releases, save the addition of a DJD (1922-2017) translation. 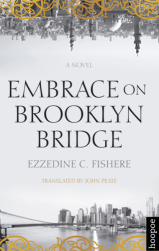 Reading Location Options: A Party to Which No one Comes; Smoky Bar; After Returning Home from an Exceptionally Bad Date

Review: “The novelist Ezzedine C. Fishere isn’t afraid to put a toe into taboo territory. Or a foot. Or, in the case of Embrace on Brooklyn Bridge, Fishere throws an entire character—Daoud—into the taboo territories of 9/11.

“Embrace on Brooklyn Bridge, shortlisted for the 2012 International Prize for Arabic Fiction, is now in muscular English translation by John Peate. The book unfolds in eight interlocking stories, voiced by eight people related by blood, love, chance, and hate. All are supposed to attend the twenty-first birthday party of a girl who won’t be there, hosted by a man many of them dread seeing.” Keep reading. 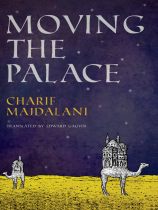 Reading Location Options: Literal Beach, on Camelback in the Sahara Desert, or an Early 20th c. Steamer Going up the Nile.

Review: “The humor that underpins Charif Majdalani’s Moving the Palace comes across so lyrically earnest that the tale might read as a straightforward adventure romance—if not for its titular palace, being moved in a thousand pieces through the desert.

This and other elements of high Orientalist-surrealism are less Lawrence of Arabia and more Terry Gilliam’s cult film Adventures of Baron Munchausen. But unlike Gilliam’s film, Moving the Palace takes care never to slip into slapstick, keeping up a royal manner much like that of its elderly Countess Raymonde Sayegh, who had ‘a positively deadpan sense of humor, but it took seventy-five years to notice.'” Keep reading.

Reading Location Options: Lobby of Your Therapist’s Office, Under Your Bed, In Your Darkened Closet with a Flashlight, in Rural Northwestern Germany

Also: If you re-read Beer in the Snooker Club, Ghali’s ghost suggests you push a fascist into a pool.

Review: “Fans have waited four decades for the first volume of ″The Diaries of Waguih Ghali″. The Egyptian writer′s only novel, ″Beer in the Snooker Club″, was published to critical acclaim in 1964. The semi-autobiographical fiction was Ghali′s one big hit, but he didn′t drift into oblivion – instead, he′s remained a cult favourite down the decades, beloved for his book′s shifting registers of wit and its depictions of 1950s Britain and Egypt. ″Beer″ also saw a renaissance of interest post-2011, when its depiction of Egypt′s 1952 revolution was held up against contemporary events.

“Volume 1′s subtitle, ″An Egyptian Writer in the Swinging Sixties″, makes a somewhat odd introduction to the diaries. This volume encompasses entries written between 1964 and 1966, while Ghali lived and worked in small-town Rheydt, Germany. A more accurate subtitle might be: ″A Study in Depression, Drinking and Failed Love Affairs in Post-Nazi Germany″ or simply ″Self Destruction″. At one point, late in the diaries, Ghali does attend a fashionable Dusseldorf party where he briefly joins the swinging lifestyle, kissing a number of women. But he prefaces this entry by saying, ″I don′t really go in for things like that.″

“More representative are the scenes that unfold between a drunken Ghali, his younger girlfriend′s racist and abusive parents and the small-town German police. If these encounters had been narrated by Ram, the protagonist of ″Beer in the Snooker Club″, we might expect Ram′s insightful, absurdist humour. But the narrator of these diaries doesn′t stand apart from events. Instead, he′s deeply embedded in his obsessions, his desperation and his feelings of powerlessness.

“As the narrator of his own life, Ghali is less Ram and more Dostoevsky′s Underground Man, obsessed with romantic relationships, the German people, his writing and the crippling depression that led to his January 1969 suicide.” 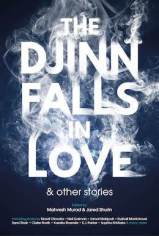 Review: “The editors of The Djinn Falls in Love (2017) chose not to standardize spellings across their wide-ranging new ‘djinnthology.’ In one story, you might find a world populated by djinn, while in another jinn appear, or jinnis, or even a genie.

“Just so, there is no collection-wide agreement on what sort of creature a “djinn” might be. Some authors are interested in the djinn of Qur’anic tradition, free-willed beings created “from the smokeless flame of fire,” who lead lives parallel to us clay-made humans. Other contributors seem to take their inspiration from A Thousand and One Nights or even the Disney version of Aladdin, where djinn are creatures who live shut up in lamps until forced, by humans, to grant wishes.

“The collection includes an excerpt from Neil Gaiman’s American Gods which scoffs at the idea that djinn can grant wishes, focusing on a magical night of djinn-human love in New York City. Sophia al-Maria’s “The Righteous Guide of Arabsat,” set in contemporary Saudi Arabia, is perhaps the collection’s biggest outlier. In her story, djinn never appear outside the protagonist’s imagination, and we suspect they only exist as an excuse to abuse his wife.

“The collection’s best stories—of which there are many—aren’t interested in djinn as a site of the exotic, wish-granting imaginary. Instead, they employ djinn in tales that move sideways to explore cruelty or loss, adolescence or injustice.” Keep reading.

Book: The Teeth of the Comb & Other Stories

Reading Location Options: Camping Among the Howls of Wolves, While Riding a Train or Plane or Other Conveyance, Under a Terrible Shadow, In Unrestrained Light

In Lieu of a Not-Yet-Written Review, One Short-short Story, “Closed Society”:

“I have lived in a closed society all my life. Once, it started to open up, but the smell was so bad that it closed right back in on itself again.” 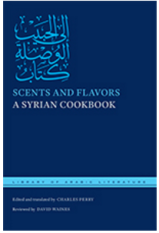 Reading Location Options: The Kitchen, or the Location of the New Medieval Restaurant You’re Opening to Great Acclaim, When Planning Your Biggest Iftar or Eid Meal

Review: “Cookbooks are a literary late-bloomer, Charles Perry writes, in his introduction to the thirteenth-century recipe collection Scents and Flavors. Researchers have turned up three Babylonian clay tablets that served as something similar to modern cookbooks. Scholars have also found a lone Roman cookbook, compiled in the second century. After that, Perry writes, there is ‘nothing more for the next 800 years.’

“‘Then there was a sudden explosion of cookbooks in Arabic,’ Perry writes. ‘From the tenth through the thirteenth centuries, Arabic speakers were, so far as we know, the only people in the world writing cookbooks.’

‘Perry, an accomplished culinary historian and chef, has edited and translated the most popular of these manuscripts, Scents and Flavors. The recipes within were compiled in Syria during what Perry calls the ′golden age′ of Arabic cookery books. Now, more than seven centuries later, we can find them in a bilingual, facing-page edition from the Library of Arabic Literature project.

“Scents and Flavors doesn′t look like a contemporary cookbook: there are no glossy photos, no oven-temperature markings and often no precise measurements. The liquid measurements are given not in cups or ounces, but in kilograms. For instance, ″1/6 kilogram of water″ must be added to ″the Judge′s Morsel,″ a tongue-titillating treat fried in sesame oil and dusted with spiced sugar, sure to put any judge in a sweeter frame of mind.” Keep reading.

Book: A Beautiful White Cat Walks With Me

Reading Location Options: Curled up With Your Cat

Review: “It’s as a playwright that Youssef Fadel appears at this year’s Paris book fair, Livre Paris (March 24-27), where Morocco is the guest of honor. Yet the Casablanca native is also a celebrated novelist: His A Rare Blue Bird that Flies with Me won the 2014 Prix du Maroc du Livre and went on to be shortlisted for the International Prize for Arabic Fiction. An earlier novel, Hashish, won Morocco’s Grand Atlas Prize in 2000.

“Strangely overlooked is Fadel’s novel A Beautiful White Cat Walks With Me, published in Arabic in 2011 and now in artful English translation by Alexander E. Elinson.

“The book is set against the backdrop of war between Morocco and the Western Sahara, told in alternating sections by a young comedian who’s sent off to fight, and his father, who works in the palace as the king’s private jester. These two characters—who are both similar and opposite—could be fodder for slapstick. But Fadel plays it differently. The novel’s “comic” sections are discomfitingly tragic, while the tragic scenes are often darkly funny.” Keep reading. 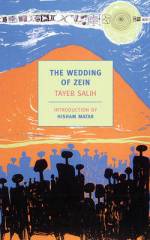 Book: The Wedding of Zein and Other Stories

Reading Location Options: Underneath a Date Palm, Beside the Nile, in the Village of Wad Hamid

Review: Denys Johnson-Davies (1922-2017) said of Salih’s work that it was his favorite among his many, many translations to bring into English.

DJD: “I feel that his work is very simple, very direct, and that there’s nothing pretentious at all about it.”

One thought on “ArabLit’s Summer 2017 Recommendations and Where to Read Them: Beach? Bar? Darkened Closet?”