Over the last two days, tweets about Saudi novelist Badriya Albeshr’s Thursday’s Visitors have exploded, after complaints about passages in the book deemed sexually explicit led to it being pulled from bookshops: 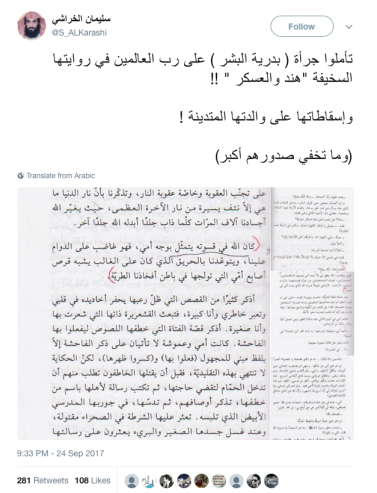 According to Agence France-Presse, a spokesperson for the Saudi Ministry of Culture said, “The ministry of culture and information has withdrawn the book ‘Thursday’s Visitors’…  and opened an investigation into the matter.”

This latest series of attacks on Albeshr’s novels apparently began when someone found Thursday’s Visitors in the children’s section of a Jarir Bookstore.

The novel is a coming-of-age in which Masha’el, the protagonist, finds herself becoming more and more like her mother, in spite of her best efforts to resist this transformation. As translator Sawad Hussain asked in her introduction to a translated excerpt, “Why and how did she end up here? Will she be able to make sense of her reality through the Thursday get-togethers where women congregate to share their joys and sorrows? Thursday’s Visitors explores the ability to forgive oneself in the face of societal pressures, especially as a woman in a community that is more forgiving of men’s shortcomings.”

From Thursday’s Visitors, by Badriyah Albeshr translated by Sawad Hussain:

On the first night, Masha’el didn’t see his face. The light in the room was dim. His voice, stifled by a shy greeting, slithered towards her. Her father had forbidden him from entering the women’s section in the Palace of Happiness, the wedding hall, so she hadn’t sat with him on the stage prepared for the newlyweds, but instead just got into his small white car afterwards and headed towards his house, both of them, alone, in silence.

She sat in the car, a heavy veil draped over her face and a black abaya over her white wedding dress, the two colors coming together in a comic mix; a withered, black abaya and a puffy, cheerful, chiffon-layered dress. That evening, her night abaya was the blackest it had ever been, what with the moon missing and the clouds grey. The glow of the streetlights along the way was pale. She arrived at his family house where he lived and, tripping over her lengthy veil and long train, climbed upstairs. She then settled on the seat in front of the vanity table and began to observe him.

He took off his brown outer kaftan, then grabbed hold of the collar of his white thawb, pulled it off and hung it on the clothes rack. He then stretched out on the bed and dozed off.

The next day, she sat next to him as he had his breakfast.  She felt shy about being next to a strange man. But she started smiling when she saw him eating. As he chewed, moving his jaw right and left with his lips sealed shut, he looked like a pet sheep she knew of. She was amazed at herself, finding herself sitting, for the first time in her life, next to a man she didn’t know.

Masha’el enjoyed detecting people’s apparent imperfections when observing them. Her stepsisters from her father’s side taught her how to do so after her mother had abandoned her at their house. Her sisters excelled at making fun of others; they honed in on a characteristic that stood out and turned it into a fault. They used to call Masha’el ‘Mouse’ because of her small nose that whistled whenever she breathed. They named her father ‘The Wet One’ – to wit, the water tanker! – because whenever he came out of the bathroom, his clothes would be drenched, as he always wanted to ensure that he had performed his ablutions correctly, and everyone who saw him in this state knew that he was ready to pray.

“The Wet One’s here,” they’d say whenever one of them wanted to warn the others that their father was on the warpath, so the imminent victims could run away and hide. She learned from them that the best way to escape their father’s wrath was to get out of his sight. Her recollections of those episodes always sent shivers down her spine, so she cut them short. She looked up just in time to see her husband pick up his tray and leave.

On the second night, he went with the men and she with the women. She came back early with his mother and his sisters, her head reeling from the kids’ screams and the squeals of laughing women. The teenage girls had pumped the volume up, and danced away the evening to songs pulsing with tambourine beats without remembering to invite her to dance with them; she’d become a prisoner with a new name: ‘Married’.

He fell asleep before she did on the third night when she stayed up late washing dishes with his sisters. They forgot that she was a new bride. They ended up playing with the water and soap, lathering the kitchen and sliding around on the tiles.

On the fourth night she locked the door while she was changing and then forgot to unlock it, so he slept in the upstairs living room without anyone noticing.

On the fifth night, she felt him draw closer while she was sleeping. She had gotten used to him and was convinced that he was that type of husband that the women would talk about at their get-togethers: a man who would come at the end of the day while all the women were together, stand outside to collect his wife and her flock of female company – sister, mother, children; a man who would always come at the end and take them home. A man to whose bedroom women would always return at the end of the day, a place just for them.

She felt his warm hand on her thigh. She was terrified. For four nights, she had slept next to him to the chorus of his snoring. But tonight his hand touched her, and she froze out of shame. She remembered that the women would talk in hushed whispers about the goings-on in the bedroom and they’d cackle. She drowned in her fear. Her heart was alert, racing as she watched his hand inch closer, wondering what she was supposed to do. Should she stop him? Now it was both of his hands. She decided to laugh to dispel her fear. She burst out in laughter and he was happy that she was laughing. He jumped on top of her and tickled her all over her body so that she’d laugh more; he nibbled her ear and she laughed even more. He pulled her thawb from the bottom. She laughed again. She kept on laughing, but her puzzlement at what was happening hung over her until she felt a sharp pain between her thighs. She stopped laughing. Then she cried. He came out of her and exhaled.

His body relaxed after he lay on his back. He heaved a great sigh and placed his arm over his eyes. She ran to the bathroom and cautiously felt around down there. She had gone in there hating herself because she had laughed. She grew furious because she had come to believe that men only snored in bed.

She was scared stiff about what had just happened. How had her mother left her to this fate without telling her that men didn’t just show their love for women by pinching and nibbling them, as her mother had always narrated in her jokes to her friends? She suspected that her father had known all along what would happen and yet he planned her goodbye party, comfortably and contently. She felt ashamed, then disgusted, then hatred for her defiled body. She wished she could exact revenge on them all, herself included.

On the sixth day her mother-in-law invited the women of the family over, so she wore puffy taffeta clothing, sprinkled her hair with rose water and then tied it up with flowery ribbons that draped down her ears. She then sat waiting until the women arrived, made themselves comfortable, and the coffee was passed around. The home of Um Fahd, her mother-in-law, filled up with many women: her father’s wife’s friends, her aunts and Um Fahd’s friends. Her mother came along as well, accompanied by Masha’el’s uncle’s wife, his daughters, her aunt’s friends and their girls too. The meeting started off in a very familiar fashion, as if she was at home. She went back to smiling and giggling with her relatives. When Masha’el entered the women’s majlis, she caught a glimpse of her father’s wife observing her and overheard her saying, “Praise be to God! At last her evilness has departed!” Masha’el didn’t comprehend the notion that there had been an evil presence in her to begin with, which now had disappeared; was evil a partner meant to perpetually walk with her, but which was now nowhere to be found? She looked towards her mother and found her happy in the company of the other women. Um Fahd flattered both her mother and her father’s wife. She helped Fahd’s sisters in pouring the tea and coffee and carrying the trays of stuffed buns and sesame biscuits. After Isha, the evening prayer, it was time to set alight large chips of Cambodian oud, whose glowing embers exhaled a heady fragrance. Each woman after the other handled the censer, allowing the fragrant white plumes of smoke to waft under their hair before getting ready to depart.

Her mother stood and put the censer, with fragrant smoke billowing from it, under her robe and said, “For married women only.” The other women chortled knowingly.

Masha’el knew that the house would soon empty of the women’s joy and their chatter, which had for a few short hours soothed the homesickness she felt here in this new home. She would return to sleep in the same bed that she slept in yesterday. She made her way through the bevy of women, who milled around bidding each other adieu and Godspeed before becoming absorbed in identifying the black abayas hanging atop the column that doubled as a clothes rack.

Sawad Hussain is ArabLit’s Cambridge-based better half. She’s also an Arabic translator and litterateur who holds a MA in Modern Arabic Literature from the School of Oriental and African Studies.  She is passionate about all things related to Arab culture, history, and literature.

You can also read Albeshr’s Hend and the Soldiers, translated by Sanna Dhahir.

One thought on “Read an Excerpt from Badriya Albeshr’s ‘Thursdays Visitors,’ Newly Banned in Saudi”