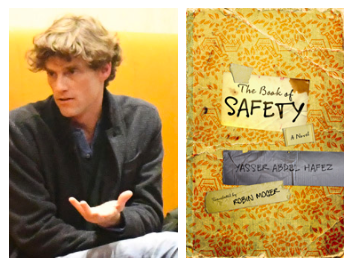 According to the news release, the four judges were “unanimous in naming Robin Moger as the winner of the £3,000 prize, to be awarded by the Society of Authors on 1 March 2018.”

For the first time in its eleven-year history, the prize had named a shortlist, made up of four books.

According to the judges’ report, The Book of Safety took the prize because:

“Robin Moger has created an alluring translation of The Book of Safety by Egyptian author and journalist Yasser Abdel Hafez that captures beautifully the moods, paces, rhythms and nuances of the Arabic original and, ruthlessly but lovingly, lures us into the conflicting, conspiratorial, and violent world that it draws. Moger makes us believe this is our world, the very world we live in,  and we care about the characters and their shenanigans, look out for whispers that will give their secrets away, and cannot wait until we know their fate. Moger is a relatively new voice in Arabic literary translation and the full force of his talent is certain to be felt in the years to come. His work will make a tremendous impact on how Arabic literature is received in English translation.”

Moger, who also maintains the blog QisasUkhra, has translated a number of compelling novels in the last decade, in addition to The Book of Safety, including:  All the Battles, by Maan Abu Taleb (2017); Otared, by Mohammad Rabie (2016); A Dog With No Tail, by Hamdi Abu Golayel (2015); The Crocodiles by Youssef Rakha (2014); Women of Karantina, by Nael Eltoukhy (2014); and Vertigo, by Ahmed Mourad (2011).