If there are the only four Algerian novels translated into Italian, this limits your choices of what to teach somewhat?

The four books are:

Jolanda Guardi: These are the only four translated from Arabic; in fact, there are many more translated from French, but, although I read Algerian literature in French and enjoy it, I teach Arabic literature originally written in Arabic. This is part of the problem: In my opinion, Algeria is not considered an Arabic speaking (and writing) country, so scholars and the reading public do not know about this production. Moreover, usually Algerian literature in French is taught by French departments, as if it were French literature, which it is not, of course. As Jean Sénac said, belonging to a certain literature means more than writing in a certain language.

Have you thought about teaching a class on Algerian literature that includes both literature originally written in French and in Arabic?

JG: No — the first reason is that my course title is Arabic literature, and we intend by this the one written in Arabic, but a second one is that I do not want to teach Algerian literature written in French. In so doing, I would perpetuate the stereotype. Actually there are novels originally written in French that could very well fit in the course as it is structured, like for example the work of Kateb Yacine. But I think this could be only a second step.

Which of the novels, among these four, do you think makes for the most interesting, rich, and nuanced teaching experience or discussion? If someone were to ask you: What should I teach, among Algerian novels or Algerian writing in translation, what would you suggest? 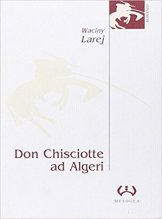 JG: I think they are all good novels insofar as they create a picture of Algeria from a diachronic perspective: before and after the liberation war 1954-1962 (Benhaduga and Mostaghanem), during the black decade 1990-2000 (Khellas), and from al-Andalus till the present day (Laredj). Of course there a lot of contemporary writers I’d like to be at my disposal in Italian, for instance: Habib Sayah, Said Boutadjine, Fadhila alFarouk and many more.

Which novels by these authors would you most want to teach, and why?

JG: I think Habib Sayah is one of the most interesting contemporary authors insofar as he is, in my opinion, the link between the old (Benhaduga, Khellas, Wattar) and the new generation (Mefti, Yasmina Salih, al-Farouk). Said Boutadjine is a great author in many ways, for the subjects he deals with (a strong critic of the Algerian system) and most of all for the language he uses — he has a really particular way of writing in Arabic. Mefti represents the younger generation, and Fadhila al-Farouk is a good representative of Algerian women’s writing. I’d also like to see at-Tahar Wattar translated, because he was a great thinker and his novels deserve to be known (he is available in English), but Waciny Laredj, too. His Don Quixote was written in 1992, and it was translated, I think, because at the time Algeria was in the news, but since then he has written a lot of very good novels and he is well known in the Arab world and elsewhere. I am also interested in pre-independence authors such like Ahmad Reda Huhu or even poets like Hammud Ramadan who, for instance, wrote in free verse in the twenties — much earlier than the Iraqi poets. This going back could help us understand better the later development of this literature, with more reference to the local than to French culture for the birth and development of Algerian novel.

Why is the focus specifically on Algerian novels? What are the resonances for Italian students? Are you interested in French texts as well as Arabic?

JG: My focus is on Algerian novel (and in general, the Maghrebi novel) because, as I said, it is still neglected by scholars, who consider it in some way ‘inferior’ with no historical nor aesthetical grounds. As said, I am interested in French texts as well, but my focus as a scholar is on literature written in Arabic. Of course one cannot speak of Algerian literature without referring to the language issue, but in general we know a lot about the French and Amazigh point of view. I believe that if we know the Arab speaking writers’ point of view too, we can have a broader knowledge of the issue itself.

JG: I wrote the article some years ago, but, if I think about the status of Algerian literature in Italy nowadays, not much has changed. As I said, we think of Algeria as a French country, which it is not. I mean Arabic cultural production has the same rights as the French one.

I try to avoid the perpetuation of stereotypes by making students aware of them. The first lesson is always devoted to epistemological issues, to scholars’ pre-commitments and to discussing the methods used to study Arabic literature (in Italy) in general. I speak of situated knowledge and situate myself, so they can be aware of my point of view and then try to discuss it. I try to stimulate their critical thinking, and I like it when they challenge me in a critical discussion.

What sort of social or historical context do you provide in the course, to help orient the students’ critical reading of the texts?

JG: It is of course very important. I mean, a specific kind of novel appears in the cultural field not from hyper uranium, but from specific historical, social, and political causes. Obviously novels are not history, they are fiction, but they contribute in shaping our imaginary and it is from imaginary that we take elements to produce discourses about society, and even political ones.

Do you also include Algerian bande dessinée? If yes: Which works do you focus on? How do you teach comics differently from print?

JG: Although the course title is Arabic literature, we discuss what do we mean with the term literature nowadays. So bande dessinée and other kind of texts may well fit in the course. Bande dessinée has a strong tradition in Algeria, in Arabic and in French. I usually focus on Slim because in his albums he treats Algerian society’s contradictions with great irony, and he does it in a mixed language — French-Arabic-Algerian (written in Latin characters). Strips and graphic novels are also a good way to show that you can laugh in Arabic too.

The teaching is different insofar it involves a reflection n the reading public to which it is addressed (wider than for the novel and of different ages) and visual elements.

And you also include playtexts from Algerian theatre? In (colloquial) Arabic or in translation?

JG: Actually no. You saw the article in the bibliography just because, as a reference, I want to show how cultural production in the Arabic language is present in drama too. Anyway, due to the amount of hours, I cannot speak about everything…

What is the role of translation in this course? What texts do you use to translate from? How does translating change their understanding of the literature and function as a mode of teaching?

JG: Translation plays a big role. First, its goal is to help students understand which processes are involved in the act of translation. Translation is the result of negotiation inside the social system where the text has been produced and is consumed. What then we can be faithful to is our interpretation of the original meaning and nothing more. This interpretation occurs through our reading of the text (reading a text affects it, changes it, as it affects and changes the reader and the translator).

In the course we’ll try to answer some questions, such as: What kind of literature is offered to the reader in translation? That is, how much does domestication as ethnocentric reduction of the foreign text to the target languages values work? Does it adhere to domestic literary canons, selecting those texts which are more likely to be close to a certain literary strategy? What influence do translation exercises have on the reader and on the Arab world image it creates? What kind of information does this give us about our own culture and our own values (and those of others)? This year, we’ll translate Ta’ al-khajal by Fadela Alfarouk and we will do the translation as a collective one (I’m convinced that collective knowledge production is always better than individual one).

JG: Students work in groups, they translate the assigned passage, then under my leadership we discuss their choices, especially when there are sentences or even words whose rendering into Italian is a challenge. When we agree, we choose the phrase or term in Italian. Collective translation is different because when you work as an individual translator you’re confronted with yourself only. When you’re with other people, they can let you see the text from a different perspective of course.

Is memory one of the core focuses of the course? How do you help students think & re-think their ideas of memory and fiction, and the relationship between memory & fiction?

JG: Yes, memory is always an issue in the course. We work on collective memory related to the concept of archive. This will make us discuss about the canon formation and in particular about the Arabic literature canon to ask us why Algerian literature is excluded from it.

JG: I speak of course of research on Algerian literature written in Arabic. The lack of interest is due partly to what I said before; moreover, you must add that Algeria has never encouraged the knowledge and diffusion of its Arabic culture abroad as for instance Egypt did and does, paying for translation, inviting European professors, and so on. Then there is this idea that the east of the Arab world is more “Arab” than the west.

Because it is a great literature with authors who deserve to be known, read, studied, and translated!

How do you think teaching Algerian literature translated from Arabic is different in Italy, vs. if you were teaching it at a university in France or the UK or Lebanon or Egypt?

JG: From France it’s easy to say: France has a long historical relationship with Algeria, and I find French scholars are too influenced by this. In the Anglophone literature, as far as I know, there is little interest in Algeria: There is only one critical book about it the one by Debbie Cox, Politics, Language, and Gender in the Algerian Arabic Novel, from Edwin Mellen Press, 2002. In Egypt, you cannot find Algerian books, and studies are Egypt-centered. In Lebanon, you find more studies in Arabic, as well as in Morocco, for example, where there are scholars interested in the Algerian literature.