America Through Radwa’s Eyes: ‘The Journey’

When the great Egyptian writer-activist-translator Radwa Ashour was a young PhD student at the University of Massachusetts at Amherst — living far from friends, family, and Cairo’s hot-loud embrace — she must have been taking notes for what eventually became her first book-length contribution to the rihla genre, called Al-Rihla, or The Journey: 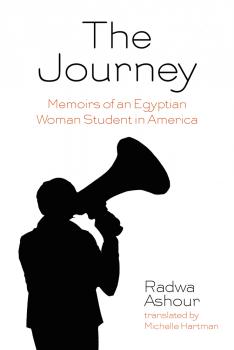 Originally published in 1983, six years after Ashour finished her PhD, Interlink has just now published the book in Michelle Hartman’s translation. The subtitle (‘ayyam taliba misriyya fi amrika) is a bit awkwardly and accurately rendered in English (Memoirs of an Egyptian Woman Student in America) but the book itself is generally as clear and direct, as in the original. We can also be grateful for Hartman’s commitment to accurately rendering Ashour’s thoughts, even where they might occasionally feel exoticizing of the African-American scholars and thinkers she admired.

Hartman writes in her afterword:

Passages where her text reads differently from what we are used to reading today, particularly in relation to race and identity, reflect how different politics and political moments a ect our expression, and vice versa.

In any case, Ashour is beautifully steadfast in her international solidarity.

Interestingly — and notably different than the choices Samah Selim made when translating the nonfiction of another seminal Egyptian writer, Arwa Salih — Hartman eschews explanatory footnotes, except one explaining a quoted verse from the Qur’an. Indeed, footnotes are not perhaps not as necessary, as the US reader, at least, already finds themselves on familiar ground, although I for one had to read up on the teen guru of the Divine Light Movement to see if Radwa was having me on. (She wasn’t.)

Ursula and I also discussed The Journey in Episode 18, our final podcast before the six-week summer break, in the context of other Egyptians writing in Arabic, for Arab audiences, about the US. Among them: Tawfiq al-Hakim, Sayyid Qutb, Yusuf Idris, Alaa al-Aswany, Sonallah Ibrahim, Bahaa Abdelmeguid. Ashour’s narrative stands out among them as being deeply interested in the US, particularly African-American history and literature, not just as a metaphor for something, but in and of itself.

Anyhow, this is all by way of saying I have a review-essay about the book on Qantara.