Two of the thirteen books chosen for the 2019 Man Booker International longlist are translations from Arabic, on a longlist dominated by smaller and independent publishers: 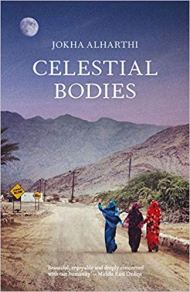 Jonathan Wright reappears on the Man Booker International longlist, this time with his translation of Mazen Maarouf’s darkly funny and surreal short stories in Jokes for the Gunmen. The stories here — to be discussed in more detail in the forthcoming ArabLit Quarterly — are much like the Palestinian-Icelandic author’s poems, but stretched into landscapes of war, disease, and grief turned inside-out.

The under-appreciated Marilyn Booth makes a first appearance on the Man Booker International longlist (in its current form), with her translation of Jokha Alharthi‘s Celestial Bodies, which was also winner of the 2010 Best Omani Novel Award. The book is set in Oman’s al-Awafi village and interleaves the lives of a family, focusing on three sisters: Mayya, Asma, and Khawla, and their different relationships to love. It also tells the stories of the enslaved people who were bound to the family, and how the relationships changed and how they didn’t. It’s vibrantly translated by Booth, who also appeared on the old Man Booker International longlist as the translator accompanying finalist Hoda Barakat.

The longlist was selected by a panel of five judges, chaired by historian Bettany Hughes. Also on the panel are translator Maureen Freely, philosopher Professor Angie Hobbs, acclaimed novelist and twitterist Elnathan John, and essayist and novelist Pankaj Mishra.

In the official statement, Hughes said: “This was a year when writers plundered the archive, personal and political. That drive is represented in our longlist, but so too are surreal Chinese train journeys, absurdist approaches to war and suicide, and the traumas of spirit and flesh. We’re thrilled to share 13 books which enrich our idea of what fiction can do.”

An excerpt from Celestial Bodies, by Alharthi, tr. Booth