Our sixth list of 10 for public libraries comes from genre-confusing, language-crossing, and word-bending author Youssef Rakha, who runs his own literary hotel at yrakha.com: 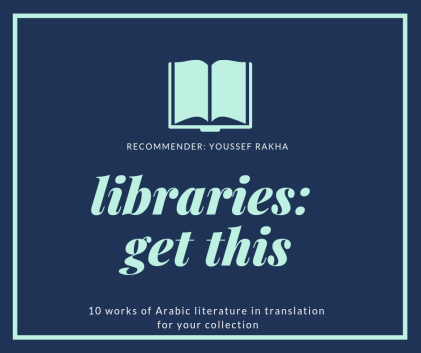 For these lists-of-ten, ArabLit is asking scholars, critics, authors, translators, and other bibliocentrics about the Arabic Literature in translation they would recommend for US’s public libraries. Eventually, this will build to a list of 100 book-buying recommendations. Having searched a number of public-library systems, we’ve decided there is no particular need to recommend Arabic’s only Nobel literature laureate Naguib Mahfouz. Anything else is fair game.

Born, raised and based in Cairo, Youssef Rakha is a novelist, poet, essayist, literary critic, journalist, photographer. He’s been at the bleeding edge of contemporary Arabic writing since 2005 but, more recently, he has turned to English, his other “native” tongue. Two of his novels — Book of the Sultan’s Seal (Paul Starkey) and Crocodiles (Robin Moger) — are available in English translation.

Ibn Battuta’s The Travels of Ibn Battuta,translated by Samuel Lee

Ibn Hazm’s The Ring of the Dove, translated by A.J. Arberry

Yasser Abdellatif’s The Law of Inheritance, translated by Robin Moger