On Publication Day: Are the ‘Lost’ Mahfouz Stories Worth Reading?

In England, it’s publication day for Naguib Mahfouz’s The Quarter, a collection of eighteen interlinked texts that didn’t appear during his lifetime (and we are not entirely sure why): 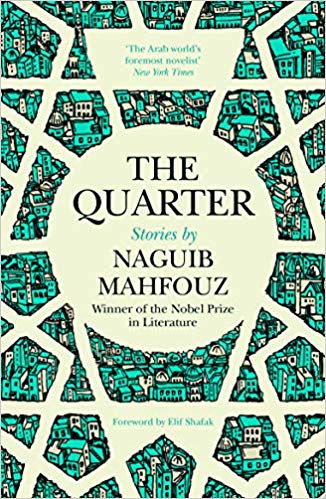 A review by ArabLit editor M Lynx Qualey ran at Qantara. It opens:

Last year, Egyptian critic Mohammed Shoair made an unusual and thrilling announcement: He had come across never-before-seen stories by Egypt’s only Nobel laureate for literature, Naguib Mahfouz (1911-2006). The slender trove of texts had been filed in a cardboard box in the possession of Mahfouz’s only living daughter. From that file comes the newly released book The Quarter, published in Arabic as The Whisper of Starslast December, now translated into English by Roger Allen.

Shoair, who is currently at work on a trilogy about Mahfouz and his oeuvre, had been hunting for an early manuscript of the controversial novelChildren of the Alley. Shoair has not yet found the smoking manuscript, but he has made a number of other intriguing discoveries. His first was in a fat folder in that dusty cardboard box. On the front of the folder was a note in Mahfouz’s handwriting, suggesting the pieces within should be published in 1994.

As Shoair flipped through the folder, he found some stories that had indeed appeared in magazines. But there were also 18 previously unpublished works. It is unclear why Mahfouz never published these short, interlinked texts, although we can guess: 1994 was the year of Mahfouz’s near-fatal stabbing by a radicalized young engineer. After the attack, Mahfouz lost the use of his writing arm. His brief final works were dictated to others.

We can’t know what Mahfouz intended to do with the fictions collected into The Quarter. He might have considered them complete and ready for publication, or they might have been the seeds of a new novel. But Shoair, who saw the master’s hand in them, encouraged Mahfouz’s daughter to publish.

Fans of Mahfouz’s best-known work, TheCairo Trilogy, might be surprised by The Quarter. Mahfouz is often represented as “the Egyptian Balzac” or, even less accurately, “the Egyptian Dickens.” But he was not only the author of the Trilogy. He was also the author of genre experiments such as The Thief and the Dogs, allegorical works such as Children of the Alley, and studies in perspective, such as Miramar. Toward the end of the twentieth century, Mahfouz was paring down his rich visual and psychological landscapes. His fictions grew progressively less about the material world, and more about the world of the unseen.

This new folio of interconnected stories is very much part of Mahfouz’s late experiments. There are no sophisticated characters in The Quarter. There is no self-reflective Kamal Abd Al Jawwad, nor a guilt-ridden Mansour Bahi. The geographical and historical specificity also disappear. We are in “the Quarter” in these 18 texts, but there is no particular Egyptian street, landmark, or well-known event.

Indeed, the stories in The Quarter—part folktale, part Sufi koan—are anti-national in outlook. The Quarter itself is a complete site of belonging. There are bigger places outside it: Europe, Zamalek, and wherever the Health Inspector comes from. But the Quarter is not tied to a national or regional history.

At the end of the collection, Saqi editors have slipped in Mahfouz’s Nobel acceptance speech. At first, this speech—which can also be read online—seems like padding for the slim collection. But on second look, Mahfouz’s 1988 talk illuminates the aspirations of The Quarter. Although Mahfouz didn’t attend the Nobel ceremony, this cannot be read as a snub: he was a man of fixed habits and rarely left Egypt. The speech he wrote gives a nod to the Nobel while also provincializing it. Although Mahfouz did not like to travel, his speech is deeply international, and it throws light on the injustices of apartheid South Africa and Palestine.

The works in The Quarter, presumably written between 1988 and the attack in 1994, are built off this universality. They also abandon many genre conventions. Time is out of joint, disasters come from nowhere, and events are almost never logically explained.

‘The disaster had happened’

The first story, “The Oven,” is framed like a moral allegory. It opens: “The disaster had happened.” The disaster in question is an elopement: the daughter of a wealthy merchant runs away with the baker’s son. We’re told what the neighborhood thinks: “Down every alleyway, at least one good heart expressed disbelief[.]” But we don’t know what young Ayousha, Zeinhum, or their parents feel about it. In folktale fashion, the shamed merchant falls on hard times. His daughter returns “at just the right moment” and saves her family from financial ruin. Yet the story doesn’t end on a sentimental reconciliation.

Instead, the ending belongs to the Quarter’s two central authority figures: the “Head of the Quarter” and the “mosque Imam,” who arrive to…

So in short: yes.

Also read: From ‘Children of the Alley: The Story of the Forbidden Novel’ (ArabLit) and On Discovering the Lost Manuscripts of Naguib Mahfouz(LitHub)

US publication is set for September

New: From the Stolen Autobiography of Naguib Mahfouz’s Childhood

One thought on “On Publication Day: Are the ‘Lost’ Mahfouz Stories Worth Reading?”