This week, the directors of the Hay Festival, which styles itself as a “Woodstock of the mind,” announced a Hay Festival Abu Dhabi, set to take place between the 24 and 27 of February, 2020: 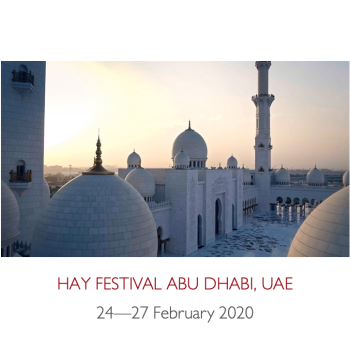 In addition to the core festival in Hay-on-Wye, Wales, there are several Hays held around the world. Indeed, according to organizers, in the past three decades, there have been 125 festivals in 30 locations. The only other Hay Festival held in an Arab-majority city was Hay Festival Beirut, which had several editions and also spawned the “Beirut39,” a list of 39 leading Arab writers under 40.

The Abu Dhabi festival will be hosted at Manarat al Saadiyat, and a press release says several award-winning authors have already been booked:

In Abu Dhabi, the festival will host internationally acclaimed authors and thinkers including Nobel Laureates Ahmed Galai and Shirin Ebadi, Lebanese novelist Hoda Barakat, winner of the 2019 International Prize for Arabic Fiction, and writers Adonis, Jokha Alharthi, Muhammed Hasan Alwan, Tishani Doshi, and many more. Hay Festival Abu Dhabi will also invite diverse voices to tell stories, sampling the best of contemporary international and Arab literature, including poets from the UAE’s vibrant spoken word and slam poetry scene. Conversations will take place in Arabic or English, and all sessions will be live translated into Arabic and English.

The festival is being held in partnership with the UAE’s Ministry of Tolerance.