We are in the process of hunting down Arabic cat stories, cat tales, cat anecdotes, cat poetry, The Great Cairo Cat Novel, and other feline literary productions in Arabic:

These are twelve to start the discussion. Please add your suggestions in the comments, on Twitter tagged #ArabicCatStory, or send directly to info@arablit.org, if you prefer to keep your recommendations quiet.

I have a cat whose foot-pads I dye with henna
before I put henna on my own newborns.
Then I tie cowrie shells to her collar
to repel the harm of evil eyes.

It also contains “Another cat poem,” and a link to get al-Jurjani’s poem as a broadside from Ugly Duckling Presse.

This brilliant long short story (or short novella) comes from al-Hajj’s collection of the same name.

As soon as I settled into the kitchen chair, she jumped on my lap.

“The little bitch! She never does that with me!”

Mistika was a mountain cat Fatma had found a few months back while taking a stroll on a beach in Sinai. A few bedouin children had been throwing around a tiny ball of fur, and it wasn’t until Fatma heard the soft, hoarse meows that she realized they were playing with an actual newborn kitten. She screamed at them and they ran, leaving the kitten on the sand in a state of near-collapse. The next day, Fatma brought her along to Cairo, checking her into a vet’s clinic for a few days before taking her home to the apartment. For weeks, she filled Facebook with pictures of Mistika, trying to find someone to adopt her, but the cat’s wild nature remained an obstacle. She’d been with Fatma for six months, hiding in obscure corners throughout the day, scratching Fatma’s hand whenever she tried to touch her, avoiding guests and eating only when Fatma went out and the apartment was empty. Only when Fatma turned on the heater during cold days would Mistika come out to sleep underneath it.

Now she was on my lap, and I stroked her head as Fatma looked on, amused.

Where do cats belong more than in a Cairo graphic-novel noir poem?

There are a lot of really wonderful supernatural stories of Egyptian cats. One can be found in Donia Kamel’s Cigarette No. 7, which Nadia (our protagonist) hears when she visits family in Zagazig. It opens:

I live a very simple life. Most days, I wake up a few minutes before the alarm, prepare to meet the world, and head down the street. I meet the black cat, my heart pounds, and my day begins. The shadow of the black cat is the first thing I see on the street every morning, whether I’m in Cairo or Alexandria, in Egypt or abroad, in the suburbs of Nasr City or Ma’adi or Mohandiseen. On days when I work in Heliopolis, if he doesn’t meet me in the morning in front of my building, I’ll find him walking on the garden wall beneath my office window. Same black cat, same green eyes, same disinterested expression. If he’d come up to me on any day over these past years, I’d have said he were a guardian spirit, or someone I knew trapped in the body of a cat. But no, the black cat never tried to tell me anything. In time, I came to look for him every morning, and if I didn’t find him, I worried, and when I did find him, my heart would pound, and I’d try to look into his eyes, but he’d ignore me and move on.

You can’t read it yet; we haven’t finished polishing the translation. But it’s coming.

A YA story of a powerful cat, a family legacy of witchery and control, and the two teens who thwart this tradition.

Reem re-tells a European horror-folktale in an Egyptian setting, with Egyptian wit, relaying the story of a girl who’s pressed into witchcraft by her seemingly kind old grandmother.  Saif must untangle the threads of the story, delving into the world of greed and witchcraft thriving just beneath the workaday world of modern Cairo.

In his office at one of Egypt’s big corporations, Saif sat in front of his computer’s bright screen, feeling totally bored. He stared inattentively at the numbers that ran past on his screen, and from time to time he yawned and checked the time on the wooden clock that hung on the wall, wondering how much time was left till the workday ended. Although he had a digital clock in the corner of his screen, he preferred the sound of the wooden clock ticking away, with its constant, circular, clockwise movement, which gave him a sense of the passage of time.

According to a note after the story, “Certain details in this story about the relationship between the late Moroccan artist Abbas Saladi (1950-1992) and his cat Minouche, and about his existential choices in life and art, are derived from the tales narrated by his childhood friend and neighbour, the self-made artist Abdel Fattah Abu al-Thaka.”

They were first brought together digging up other people’s trash, trying to keep starvation at bay. And since that first encounter at the public dump on the outskirts of Marrakech, the two were inseparable.

This beautiful, lyrical, joyful story of new birth — and the wary jealousy of the cats who already live in the household — is a visual delight. It tells the story of the first seven days of a baby’s life, and the traditional “aqiqah” party held on the seventh day.

Illustrated by acclaimed artist Maya Fidawi, this book won the 2017 Etisalat Prize for Arabic children’s literature in the “illustrations” category.

It is centered around some beautiful, curious cats, who are like stand-ins for older siblings, whose lives will change with the arrival of a new baby.

Stella brought three cats to the apartment, and at first that was okay.

They began to equip themselves for their new lives. Stella brought three cats into the apartment, two of them gray-haired and one black, with shining eyes. He was her favorite because of his unimaginably daring exploits. And Mordechai let his mustache grow out to cover the lower “sector” of his face. (Mordechai, as always, was enamored of military jargon.)

In the beginning, Mordechai had no complaints regarding his wife’s cats. He considered them to be an inevitable variation in a life that was otherwise completely on course. And in the beginning, Stella did not mind her husband’s mustache. She viewed it as a custom that many a soldier and commanding officer followed, in Israel and the world over. Military men distinguished themselves through their abundant and lengthy mustaches. 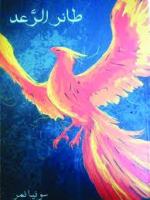 Thunderbird begins as the local fortuneteller (a reader of coffee grounds), Umm Arab, has a strange and mysterious prediction for the orphaned Noor’s future. For the last two years, since the untimely deaths of her scientist/archaeologist parents’ in a plane crash, Noor has been living in the old family home with her Uncle Ziad, Aunt Widad, her cousin Wafaa, and her grandmother. Noor’s aunt and cousin do not make her feel welcome. Indeed, they deeply resent her. To make things worse, when Noor gets upset, mysterious fires flare up around her. The only person who believes in her is her beloved and sympathetic grandmother. Her grandmother gives Noor a gift – a strange ring – from her father before she dies.

This fantastic time traveling novel follows Noor as she hooks up with a cat (who’s really a djinn), discovers that the King of the Djinn needs her help to save the world, and travels back 500 years — although not before she has a harrowing trip through checkpoints to get to contemporary Jerusalem.

First in a trilogy.

This is a story of love and loss, friendship and honoring those who are gone, warmly and richly illustrated by Maja Kastelic. 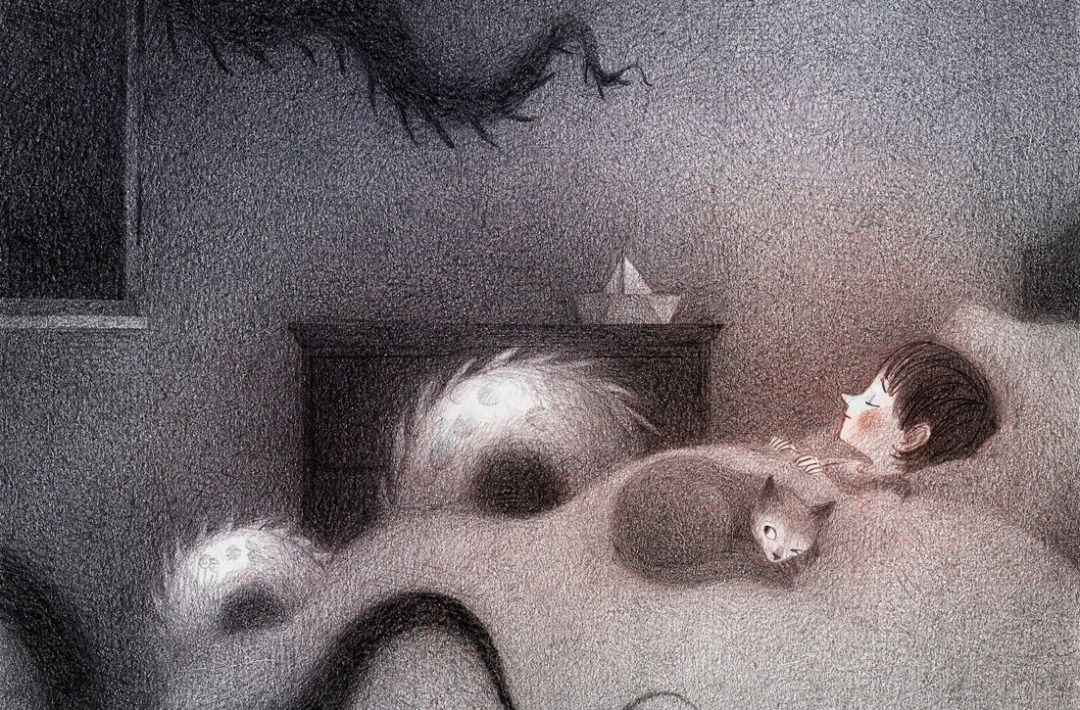 Many of the stories in this collection involve cats of one stripe or another. You can read a few of the stories, re-translated by Marilyn Hacker, over at The Critical Muslim. “The Speakers” opens:

When I miaow like a cat, my mother and my father make fun of me, they say that there are two cats in the house now, a female and a male. My brother, who is ten years older than I am, and who always brags about studying French at school, makes fun of me too, but I don’t react to their teasing. I just smile, because they don’t understand that I only meow when I want to talk about something with my white cat, whose language I understand. I also understand the walls’ language, and the trees’ language, and the birds’.

Cats don’t utter a word until they’ve thought about it for a long time.

Walls are talkative; if you ask them a question, they’ll go on for hours looking for an answer.

Trees prefer silence, and they claim that words tire them out and make them forget their work.

A classic YA novel (called A Cat’s Diary in Arabic) that tells the story of a cat during the Lebanese civil war. The Siamese Zeeko leaves his cat family as a kitten, and is adopted into a human one, his new “mother” a young girl named Muna.

The book, inspired by real events, was on the 1998 IBBY Honour List.

Nasrallah said: “Some people say that the war time should be rubbed out from our memories and be forgotten once and for all. This is their opinion; but I believe we should remember, so that we may learn a lesson, and so that the past may be a warning for generations to come.”

5 thoughts on “12 Reads: Looking for the Great Arabic Cat Story”