Hilal Chouman: ‘This is Truly the Revolution of the Disenfranchised’

Lebanese novelist Hilal Chouman was featured in the “chitchat” section of the most recent Mada Masr “Detox,” a feature that appears each weekend: 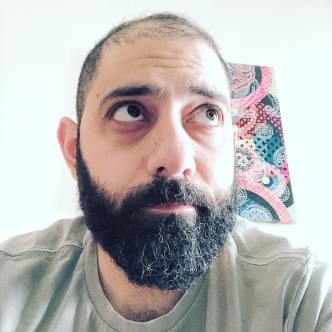 The chitchats are always a feature to look forward to. In his, Chouman talks about what he does and doesn’t write; the Lebanese revolution; and the tiring experience of publishing his acclaimed novel Limbo Beirut.

Here, when asked about the “homeland”:

I answered this question in writing, in a text published in The Outpost. The summary of it was that the answer is intimate people with whom we share specific moments that are a metaphor for an entire life. In this sense, the place is insignificant to the answer. Now, when I think about the answer I reached after elongated sequences of taking one step forward and ten steps back, I find that it is related to the Lebanese idea. Said Akl said in his poem “Lebanon”: “And from the small home, we pioneer the earth / We spread our villages on every beach / We challenge the world, its peoples and corners / We build to establish a Lebanon.” This is the burden we struggle with, a metaphysical idea stuck to us like gum; we cannot escape it, so we try to destroy it from within. The current regime, as embodied by the foreign minister, has promoted the term “spread.” We have become “spread” [across the world] and the nation became a suitcase or maybe we are the ones inside the nation’s suitcase. It is tiring and it is a journey that does not end within the country until it starts all over again when you leave it. What is the Lebanese nation and how can we reshape it? Without these reshaping attempts, constant oppression of nationalities and minorities overtakes the nation in its daily, systematic torture. This all seems related to you in spite of yourself and it is not enough to apologize for it. Home, in this sense, is closer to an accusation than the typical, nostalgic idea.

Chouman also talks about the use of language in Lebanon right now, the struggle over whether this is a “revolution” or a “movement,” and about the writing on the walls:

The revolution is reclaiming this meaning and is questioning this architectural, business, banking cruelty. The amount of writing on the walls in the center of a city that remains empty at night can only be understood as the escape of the buried. There is a muffled language that found its way to the public on walls and tongues, on bodies and in chants. I read many writings about the “end of the civil war” and the “end of sectarianism,” and as much as I respect the enthusiasm, I tend to describe what is happening as the “expiration of the Second Republic” and an attempt to explore the domain of an authentic, popular formation whose great emergence was created by prolonged impoverishment. I believe the past — whether we call it a civil war or peace — will not end until the fall of the Second Republic, which is the protector of the official narrative of the civil war and the killer of the war’s missing and kidnapped.

Read the whole chitchat in Detox 8.

Past chitchats have featured Sudanese author and playwright Hussam Hilali; Egyptian author-translator Haitham El Wardany; and Egyptian novelist Ahmed Awny, among others. One could build a reading list from chitchat authors.

You can support the chitchats at Mada Masr, a rare place of honest and innovative journalism, by becoming a member.