Leri Price has won the 2019 Saif Ghobash Banipal Prize for Arabic Literary Translation for her “sharp and unobtrusive” translation of Khaled Khalifa’s Death is Hard Work: 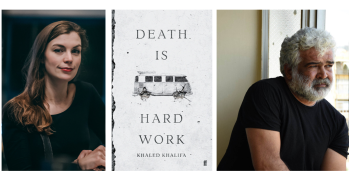 The prize was judged this year by Ghazi  Gheblawi,  Dr  Jan Fortune, Abla Oudeh, and Catherine Taylor. According to the judges’ report, the decision was unanimous. It says, in part:

Leri Price deserves the highest commendation for her achievement in conveying the vividness and the intense style of Khaled Khalifa’s compelling novel about survival and humanity in modern-day Syria in a subtle translation that is both sharp and unobtrusive. Price was successful in dealing with the intricacies and nuances of a narrative that takes us into a world of chaos, thrill and tragedy, a world imbued with the absurd and the horrific. The judges noted particularly that the translation succeeded in conveying all aspects of the author’s enthralling text, in which lyrical prose combines with the forensic nature of reportage, in a seamless and smooth manner.

In a prepared statement, author Khaled Khalifa said: “I cannot hide my delight and excitement at the news that my friend and translator Leri Price has won this prize, the reputation of which grows with every passing year. Leri Price has developed greatly as a translator over the last ten years, and her constant diligence and patience render her highly deserving of all recognition.”