‘This Is Not My Book’ 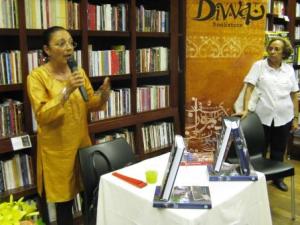 Dr. Samia Mehrez last night signed copies of her (sorry, not her) Literary Atlas of Cairo, the first of a two-volume project that maps Cairo through its literature, providing “a literary topography of the sociocultural, political, and urban history of the city by bringing together some one hundred works by Egyptian and Arab writers who represent several generations of men and women, Muslims, Copts, Jews, citizens and lovers of the global metropolis, writing in Arabic, English, or French about the City of Cairo.”

These are not the words of travelers such as Flaubert or Forster, Mehrez writes in her introduction. They are residents whose “reconstruction of its literary geography and experience with its urban topography can indeed render the cityscape legible….”

Mehrez gave a brief overview of the project—AUC Press Director Mark Linz jokingly complained after that Mehrez had “given the book away,” and now no one would need to buy it—at the pleasantly crowded event.

I suppose I don’t have much more to say about the book until I read it. But I’m certainly interested in how something like this might work: Does it just become a jumble, or does a picture of Cairo (multiple, layered) begin to emerge?