Attendees at the “The Woman’s Voice in Fiction: Global Perspectives” talk Thursday at the 2011 Sharjah International Book Fair had the tremendous privilege of hearing a few paragraphs from Ahdaf Soueif’s forthcoming memoir, Cairo: My City, Our Revolution.

The book is scheduled for release by Bloomsbury in January 2012. Soueif is still finalizing the translation into Arabic, she said Thursday. I didn’t catch the Arabic publisher, but I imagine it will be Dar el Shorouk.

The book, which interweaves Soueif’s long relationship with Cairo with the events of January and February of this year, was written quickly, she said. But it is nonetheless in her thoughtful, musical style. Soueif said at the event that the women writers she has most admired are George Eliot and Colette; these influences are evident in her writing.

Unfortunately, I had some trouble with background noise and my recorder, so I am not able to share a small snippet in her voice.

The sections she read began with struggle:

“Families will spend months of heartbreak finding out, and trying to prove, how their children were killed. … And in the midst of it all, soldiers will break down and cry and be comforted by the revolutionaries.”

But the Egyptian people in this account are never passive. They fight back “with their bare hands, improvised weapons, and the anger of many years.” 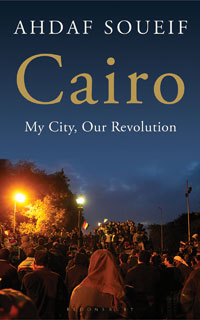 Soueif moves this material in and around her family story, here contrasting her mother and her aunt Tufi:

“When my mother was twelve, she fell twelve with rheumatic fever. This meant she got to stay in bed and read.” On the other hand, Tufi was the one who kept her curtains properly pleated, to hide the seams: “Tufi’s flat was a demonstration of the proper way of doing things.”

Soueif also discussed the reasons she has not been able to finish her novel-in-progress, including personal losses (the deaths of her mother and husband), projects (PalFest). These were already enough to slow the writing of her novel, which she began in 2001. And then, she said:

Soueif had spoken with Sarah Carr about that novel project in 2008. Carr wrote that the novel is set 4,000 years ago, in the period of transition after Upper and Lower Egypt went to war. Soueif told Carr:

“Four thousand years ago, Egypt was in its Middle Kingdom, which is like its classical period, when they carried out agricultural and irrigation projects and there was a literary renaissance.

“But what happened is that the Old Kingdom collapsed very suddenly, resulting in a war between the north and Upper Egypt, which Upper Egypt won, and which resulted in the Middle Kingdom.

“Whereas before people had faith in physical structures such as the Pyramids, they became disillusioned with these structures during the age of chaos precisely because it hadn’t saved them from this chaos.

“In addition, whereas previously only the king was considered to have a soul, in the Middle Kingdom everyone was thought to have a soul — which you can consider a bit like the beginning of democracy.”

Soueif sees clear parallels between Egypt’s transition through the age of chaos 4,000 years ago and the turmoil and moral questioning the world is currently going through, which she thinks can only be stopped through “radical change.”

I do hope that somehow Soueif can turn down invitations to appear at festivals and talks (although I have always so enjoyed seeing her), the myriad interviews and other duties, so that she can focus on the novel. And I do hope that it brings her some small peace.

Soueif has written pieces for The Guardian about Egypt; I believe some of these have been incorporated into the memoir. Read them at The Guardian.

You can read the publicity material about Cairo: My City on Bloomsbury’s website.

3 thoughts on “Ahdaf Soueif Reads from Forthcoming Book, ‘Cairo: My City, Our Revolution’”