International publishers are meeting in Sharjah again this year, the thirty-first year of its international book fair, although only the fourth in its new guise as one of the world’s important trade fairs.

The Sharjah fair — in some ways in competition with the Abu Dhabi fair for the top spot in the UAE — retains its kid-focus (200 events!), although also with a lot to offer grown-ups.

There are dozens of visiting authors, with a celebration of Egypt and a focus on India, Bangladesh, and Pakistan; publisher-training courses; more than a dozen cooking programs; and the launch of a number of books, including Noura Noman’s Ajwan (pub. Nahdet Masr), the first sci-fi novel by an Emirati writer.

At a morning speech to open the fair, Sheikh Sultan bin Mohamed Al-Qasimi talked about the challenges of digital publishing, saying, “We believe that the publishing houses in the UAE and our region should keep up with this new revolution and innovate attractive ways to display ‘paper’ books and ‘digital’ books to encourage readers to buy books and read them in whichever way they prefer.” (More from the morning speech from a prepared release.) 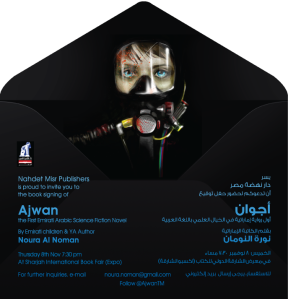 UPDATE: The Etisalat Prize has been awarded to ” كائنات سقف الغرفة ” (Creatures in the Ceiling), written by Nabiha Mheidly and illustrated by Hussam Zahr Eldeen. The million-dirham prize will be split between author, illustrator, and publisher Dar Al Hadaek.

Later this morning, the winner of the Etisalat Prize for Arabic Children’s Literature will be announced; meanwhile, the Cultural Personality of the Year award has already been announced — twice — the first time (unpopularly) for Farouk Hosni, and now for UAE poet and writer Habib Al Sayegh. In neither case have I been able to get an official reaction from fair organizers or PR.

The popular Algerian novelist Ahlam Mosteghanemi will be at the fair to talk about her self-help book Nessyane.Com (The Art of Forgetting), available in English from BQFP, and Adel Imam will, somewhat improbably, talk cinema and revolution.

The Sharjah fair is set to run from the 7th to the 17th.

Meanwhile, in Tunis, the book fair opened on the 29th, and is set to close today. Insha’allah poet Inas Abbasi will have a report on the Tunisian fair (less bally-hooed and less-reported than the Sharjah fair, but still significant), and we will hear more from Sharjah as well.

More on the Sharjah fair:

From the fair: Schedule of the cultural program

The National: The Sharjah International Book Fair, three decades on

The National: Cooking and literature meet at the Sharjah International Book Fair

More on the Tunis fair: