If You’re in L.A.: Lit Events at the Levantine Cultural Center 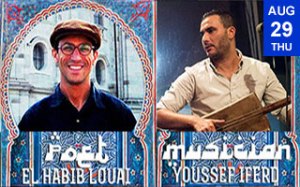 The first is on August 29, when Moroccan poet-translator El Habib Louai will be accompanied by musician Youssef Iferd, and the second on September 22, when the “We Are Iraqis” literary and musical salon will feature Deborah al-Najjar, Leslie Cockburn, and poets & writers reading from the collection Al-Mutanabbi Starts Here.

Co-founder of the LCC, Jordan Elgrably, answered a few questions about the center:

ArabLit: When in 2001 did you open up the Levantine Center? What were the motivating factors & first events you put on? How has it grown? What have been the major landmarks in the last 12 years?

Jordan Elgrably: A small group of Americans of North African and Middle Eastern heritage, from Morocco, Egypt, Iran and Lebanon, launched the center during the summer of 2001, with the mission to champion a greater understanding of the Middle East/North Africa (MENA) by presenting arts and education programs that help to bridge political and religious divides. We were all too aware of the existing biases and lack of representation regarding Arabs/Muslims and other cultural groups from the MENA. This was apparent in film and television characterizations prior to 9/11, which of course only exacerbated the situation. Recent Hollywood films such as “Iron Man” and “Argo” continue the tradition of stereotyping Arabs/Iranians, to use them as villains, without providing real context about the cultures from which they derive.
We started out very small, doing a few programs a year, but each year we doubled our budget, going from $5,000 to more than $150,000 per year, and in this fiscal year we hope to double that again. We now present 4 to 8 programs per month, ranging from film screenings to lectures, art exhibits, concerts and comedy shows, as well as arts workshops.
Landmarks include:
2005-present: The Sultans of Satire: Middle East Comic Relief, the longest running Middle Eastern stand-up comedy show in the country
2012-present: We founded Freedom Theatre West—the first theatre company in Southern California devoted to the Middle East subject.

AL: What audience(s) does it reach? How do you see the LA Levantine Center as different from other ME art centers in the US, such as ArteEast?

JE: Our audience is ethnically, religiously and culturally diverse. For instance, a July/August 2013 poll of over 5,000 constituents revealed that approximately a third of respondents are Muslim, a third Christian, and a third Jewish. 50% of the audience members attending a June 2013 public conversation on Turkey were not Turkish.

JE: Since 2001 we have presented consistently edgy literary programs, such as “Arab Women Poets”, “The Art of Resistance: Arabs, Blacks & Jews” and “Middle East Poets for Peace.” We’ve presented many literary salons that feature anthologies, which seem to draw passionate audiences.
AL: Are there additional Arab (and other ME) writers/playwrights who you’d like to bring to the center? What are the biggest challenges in staging literary events?
JE: In 2013 we presented the work of Arab American playwright Cynthia Sophiea, who is Lebanese and Palestinian and performs her one-woman show “Everyone Has Tears.” In 2012, we presented American playwright Valerie Dillman’s “Sarah’s War,” a fictionalization of the Rachel Corrie story, about an American peace activist killed in Gaza by an Israeli militarized bulldozer. “Sarah’s War” received “critic’s choice” and other top reviews (see freedomtheatrewest.org).
AL: How is the Levantine Review related to the center & its mission

JE: The Levantine Review publishes creative nonfiction and poetry related to the Middle East, North Africa and its diaspora, informing readers on cultures and arts that are not always readily accessible in mainstream media.