In the Room at the Poetry Translation Centre: Reading al-Saddiq al-Raddi

Last week in London, the Poetry Translation Centre held another of its collaborative poetry translation workshops. Clarissa Aykroyd was there and shares her impressions: 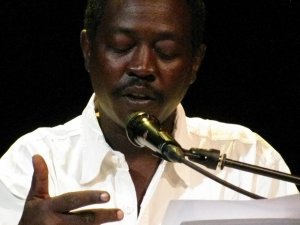 I’ve attended a few Poetry Translation Centre workshops now, but this one was particularly interesting. It featured the work of Sudanese poet al-Saddiq al-Raddi, and the poet himself, who now lives in London, was there.

One of the PTC’s stars and certainly one of my own favourite poets, Saddiq has a place in the overlapping African and the Arabic literary worlds. I’ve now read a reasonable amount of Arabic poetry in translation, but most of it has been, unsurprisingly, from North Africa and the Middle East. Saddiq’s work is deeply enriched by his Sudanese background and with the history of the region. Lush and beautiful, it is also extremely subtle and can be somewhat mind-bendingly complicated.

The poem we translated in the workshop, “Longing,” fell into the latter category and proved quite daunting. The translator who had produced the literal English version, Samuel Wilder, had selected a sequence of poems from which Saddiq had deduced that he was a) a bit of a romantic and b) possibly interested in Sufism, which is a huge influence on Sudanese poetry and was especially evident in these poems. The other poems were shorter, had charming details about butterflies, and while also complex were probably a little more straightforward. So, naturally, the group chose to go for the long, extremely difficult poem…

We had quite a large group for this workshop, led by Sarah Maguire, who is the head of the PTC and an award-winning poet — her last collection, The Pomegranates of Kandahar, was shortlisted for the T S Eliot Prize. The others participating, aside from the poet and the translator, included students from SOAS University of London, poets, translators who clung desperately to the multiple meanings of the original Arabic words which couldn’t be literally translated into English, and a jack-of-all-trades writer who kept trying to draw tenuous connections between the line we were working on and something six lines later. (That last one was me.) Such a multiplicity of perspectives was valuable but also complicated.

“Longing” proved to be a poem with few definite conclusions, but it repeatedly returned to the dialogue between things which are contrasting or in opposition in an apparent attempt to break through the limitations imposed by “too narrow vessels” (words) on their contents (the actual meaning or essence of things).

In working through this poem for a few hours with the group, I certainly appreciated the oft-expressed view that translation is the best way to engage closely with a poem. “Longing” proved to be a poem with few definite conclusions, but it repeatedly returned to the dialogue between things which are contrasting or in opposition in an apparent attempt to break through the limitations imposed by “too narrow vessels” (words) on their contents (the actual meaning or essence of things). To a certain extent, I was reminded of Paul Celan — which, interestingly, also happened when, in another workshop, we translated a poem by Ateif Khieri, a Sudanese poet who is friends with Saddiq.

I think the similarities with Celan involve a certain surrealism; a co-existence of precision and open-endedness; a loose line structure; and a willingness to break and re-form language to try and get closer and closer to the nature of reality. At least, that’s how it came across as we underwent the difficult task of bringing these very difficult but rewarding poems into English.

Most of Saddiq’s poetry on the PTC website, and in the chapbook of his work that they have produced, was translated by Sabry Hafez and Sarah Maguire. A few of my favourites include “In the Company of Michelangelo,” “Small Fox,” and “Garden Statues.” I’m particularly happy that I’ve been able to include “Garden Statues” in an anthology of verse and prose which I’ve just finished editing in my day job for LAMDA Examinations.

Clarissa Aykroyd grew up in Victoria, Canada and studied at the University of Victoria. She has also lived in Dublin and now lives in London, where she works as a publisher for LAMDA Examinations. She has published fiction, educational non-fiction, reviews and poetry, and currently blogs about poetry at The Stone and the Star (http://thestoneandthestar.blogspot.co.uk/).

One thought on “In the Room at the Poetry Translation Centre: Reading al-Saddiq al-Raddi”