ANHRI Calls For the Release of Omani Poet Nasser Al-Badri 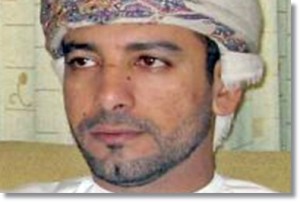 The poet was apparently seized by Oman Intelligence Service on December 20, on account of tweets deemed offensive to the Sultan of Oman.

The tweets which ANHRI believes responsible for his detention, posted Dec. 19, are a series:

in which Al-Badri commented on the intense economic crisis in Oman; addressing Oman’s Sultan Qaboos for being the father of the royal family and demanding from him to intervene to achieve the necessary reforms for the sake of family cohesion, and to maintain the high image of the Sultan. He also demanded from Sultan Qaboos to designate a Prime Minister who could be held by the citizen accountable, the matter that is regarded by the security bodies as an insult to the Sultan, whose perpetrator is deserved to be punished for.

The Oman News Agency apparently responded to those arrests with a June 13, 2012 release, in which the agency noted that, “It has been noticed that there are growing participations and negative writings on discussion forums, social networking websites and mobile applications. These writings include libels, spreading rumors, provoking sit-ins and strikes.  Such writings are against values and morals of the Omani society, principles of the freedom of expression, as well as objectives of the constructive criticism.”

The release further asserted that, “Such practice prejudices the national security and public interests.  It is also a violation of the laws in force, such as the Omani Punitive Law, the Telecommunications Regulatory Law, the Cybercrimes Combatting Law and other respective laws.”

Nasser Al-Badri’s detention is generally tied to the context of the crackdown imposed on freedom of opinion and expression, and to the prosecution of political dissidents as well as human rights activists in particular. Al-Badri is being detained because of expressing his opinion, which he has omitted owing to the police considerations imposed on whatever is being published in the Sultanate, and was not spared from harm, however.